Washington plans to savor the moment 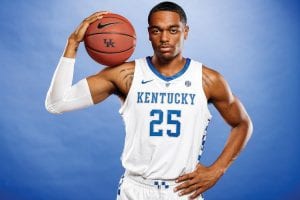 P.J. Washington is bigger and stronger for his sophomore season. (UK Athletics)

P.J. Washington is taking a different approach going into his second season at Kentucky.

Washington admitted last year was somewhat of a blur because of a steady and rapid pace, not to mention the demands that come with playing for the Wildcats.

“You’re young (and) it’s really hard,” he said. “Especially here because we’ve got a lot of fans. Obviously going to class people just take photos and get autographs. This is just shocking at first. none of us have ever been around anything like this. We’re kind of used to it now. I’m taking one step at a time.”

The sophomore forward added it was “hard to tell people no” when it came to autograph seekers and others seeking a selfie to post on social media.

“When we tell people no, they think you’re cocky or something like that, but you just have to go out and be polite to everybody you meet,” he said. “Speak to them, that means a lot to them. You just tell yourself, ‘the world is watching,’ which it is.”

Washington also learned the demands of playing at a high level on a consistent basis.

“I learned how much you have to work,” he said. “I mean everybody can pretty much play at this level. There’s a lot of great Division I players. Everybody is coming out trying to beat Kentucky every night. You have to go out and play your game because the other team is playing their game. You got to go out and just try to have fun but, at the same time, know what you’re doing.”

Washington played with a broken pinky finger during the second half of the season and an off-season surgery provided a cure. Washington said it wasn’t easy playing with his finger taped both in practice and in games.

“It’s definitely a lot better than what it was,” he said. “It was hard to grab rebounds and I mean everything just hurt. I just really just felt like I had to just try to forget about it and just keep on playing.”

The team’s trip to the Bahamas in August gave Washington an opportunity to regain his confidence and compete injury and pain free.

“The Bahamas really helped me out,” he said. “I was working a lot this summer. To be able to go out there and play well really helped me a lot and I feel like as a team we’re confident like we were last year. So we got to go out and basically handle our opponents.”

Washington declared for the NBA Draft last spring, mostly to get a feel for his future, and said the process was a learning experience. He plans to work on defending and “being able to guard multiple positions (on the court).”

“I learned to just to be more aggressive and go out and bring energy on both ends of the floor, work on my outside shooting and be consistent with that,” he said. “(I also learned) to be able to have more confidence, knocking shots down.”

In addition to picking up the pace on both ends of the court, he plans to become a better leader this season.

“I feel like I’d be a lot more vocal, just because I’ve been through it,” he said. “I know these guys haven’t seen what it’s like playing in the SEC and playing in tournaments and stuff. You’ve got to basically be the vocal leader and show everybody by example.”