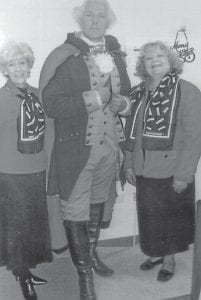 — The Rev. Mark Collins, son of Eddie Collins and the late Sue Collins, formerly of Whitesburg, has portrayed George Washington in the miniseries “The Revolution”, shown on the History Channel; in the film “National Treasurer”; on stage; and in speaking engagements. Collins, of Yorktown, Tex., is the same height and has the same color hair and same build as Washington. He is pictured with his cousins Sally Caudill (left) and Rebecca Ann Reynolds, members of the Pine Mountain Chapter of the Daughters of the American Revolution.