Washington works hard to get ready

After his team lost its final game in the 2019-20 season, guard TyTy Washington went to his head coach at Arizona Compass Prep and asked what he had to do to work on his body.

“The next day he was going to work,” said Chad Dunn, who has over 20 years of experience in the health, fitness, and sports performance field.

Washington found himself working out with athletes like quarterback Tyler Shough, who played three years at Oregon before transferring to Texas Tech, and Washington State quarterback Gunner Cruz.

“He was working out with other Division I guys. He’s such a true competitor. Most guys like that just like to go play. They don’t like to work out and lift. TyTy bought into what we were saying and changed his whole body,” Dunn, the co-founder of Move Human Performance, said.

Dunn spent about two years helping Washington redefine his body for college and that should help him on the court when Kentucky’s season begins because the freshman point guard got a head start on his development working with Dunn — who also worked with former UK receiver Kauyane Ross. 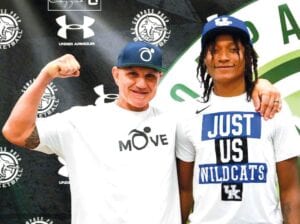 Trainer Chad Dunn says UK freshman TyTy Washington was willing to work to redefine his body and improve his defense to prepare him to play at Kentucky.

“Playing the high school schedule he did is demanding. College is easier in some aspects because he will have more time to rest and recover,” Dunn said. “Making sure he was able to play every game last year was a big thing. We had to educate him on the recovery side and not have him lift a lot of heavy weights because he’ll do that in college.

“But he works. Never play cards with him. He will never show you everything he has. He will always high school football at Lexington Catholic while Burton played at Frederick Douglass).

“We played together for a lot of years,” Allen said. “When we didn’t go to the same high school, we still kept up with each other. But for about three or four years when we were little kids we played together, and it was a lot of fun.”

How good was the team?

“We were pretty good,” Allen said. “I didn’t have to do too much. I handed the ball off and we won a lot of games. It was fun.” 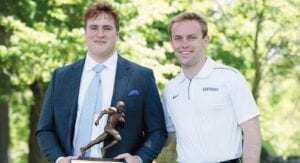 Allen is part of a three-way battle for the starting quarterback position, but he also thinks Burton is going to compete for playing time this season.

“The strides I saw him making as a true freshman in the spring coming in when he should still be in high school were huge,” Allen said. “He has worked hard.

“I know the offense is new to him just like it is to all of us. He’s looking fantastic as a true freshman. He did a great job the whole spring and I really think he will do even better when (preseason) camp starts. He just knows what he is doing.” s

Kentucky assistant coach Orlando Antigua was part of some incredible wins, including the 2012 national championship, when he was on John Calipari’s staff before. But he was also part of one of UK’s most stunning losses when he played for Pittsburgh. have something else to give you.”

Washington had plenty of athleticism. Dunn tried to help him move more efficiently. The trainer explained that boxer Floyd Mayweather Jr. is not the strongest boxer but moves so well. That’s what he helped Washington learn to do better.

“You want to teach these great athletes how to use their bodies more efficiently and what muscles to use. He will make big strength gains in college. I wanted to make sure he was flexible and mobile, and he is,” Dunn said. “All these kids are beat up in July, August, and September from playing so much when they are in high school. You have to watch them.

“The one thing I try to tell guys like TyTy is that this is a business. He’s going to a new job at Kentucky. I got the strength program he was going to be using there and went over that with him. He was like, ‘I am ready for that.’ But I wanted to make sure he had a smooth transition at UK and then start doing what it would take to get to the NBA.”

Dunn said Washington accepted the value of taking care of his body and what preparation it took to do that.

“He is one heck of a kid. He has his own personality,” Dunn said. “He brings excitement to everything he does. The bright lights at Kentucky won’t bother him. He’s basically starting his career as an entertainer now and he entertains you when he’s on the court with the way he plays. He knows he is there to put on a show and if he does that his team has a great chance of winning.”

That’s why Washington wanted to improve his defense last year — and believes he did because of the work he put in with Dunn.

“The first thing they have to do is realize they cannot play that high school stuff at the next level. It is a man’s leg. You can’t shuffle. You have to turn and run. We worked on lateral motion, explosion. He’s a great student of the game. He listens to every detail and uses what he learns,” Dunn said.

“He’s an electric scorer with great court vision. He listens, he leads. But he knew his defense had to be better and worked to make it better last year. If you are taking a car to a big car show, you don’t take it with dents. You have got to make sure it is polished up and that’s what he did by improving his defense.” s

That came in the preseason NIT on Nov. 22, 1991, when Pittsburgh trounced UK 86-67 in Rupp Arena. Antigua played 17 minutes for Pitt and had nine points on 3-for-4 shooting from the field, eight rebounds, four blocked shots, one assist and one steal. Jamal Mashburn had 26 points, six rebounds, three steals, and two assists for UK before fouling out. Kentucky missed 56 of 77 shots.

Antigua said the victory was significant for two reasons.

“Kentucky was recruiting me as a (high school) senior and I was about to come and visit and the last scholarship was given to Aminu Timberlake, so I had to change visits and wound up going to … I visited Wake Forest and then committed to Pitt,” Antigua said.

He also got his first real taste of BBN mania the next season after he came back on the Rupp Arena court.

“I remember after the game coming out and seeing 7,000 fans still in the stands listening to the (postgame) radio show, which continues to happen now,” Antigua said. “I was in awe of that. I was like what’s going on, what happened? And they’re like no, they’re just hanging out waiting for the radio show.

“It wasn’t happening at Pittsburgh, so it was a neat experience to be a part of.”

Kentucky went on that season to finish 29-7 overall, win the SEC with a 12-4 mark and lost to Duke in the NCAA East Region final on Christian Laettner’s buzzer-beater.

Now he’s hoping to help get Kentucky back to a championship level, especially after the 9-16 debacle last season.

“One day at a time. Working, spending time with each other, growing, challenging each other,” Antigua said. “It takes a lot of hard work to get to March but you can’t get to March before you get to August, September, October. So we’ll worry about that once we get to those points.” s

Gabby Curry got to throw out the first pitch at an Atlanta Braves baseball game when she was named the Georgia high school athlete of the year before her freshman season on the Kentucky volleyball team.

Now she’s going to get a chance to do the same things for the Cincinnati Reds June 29 at Great American Ballpark when the Reds present the trophy to the UK volleyball players and coaches for winning the national championship.

The ceremony honoring the UK volleyball team, which finished 24-1, will be at about 6:55 p.m. before the Reds host the San Diego Padres.

Curry was the SEC defensive player of the year during the national championship season. s

When Kentucky starts to put together the receiver depth chart before the season opens, freshman Chauncey Magwood of Georgia is a name to remember.

The 6-0, 180-pound Magwood had to move to quarterback for Lee County High School last season but was still ranked as one of the nation’s top 100 receivers by both ESPN and Rivals.com.

“Magwood just eats it all up,” Kentucky offensive coordinator Liam Coen said. “He’s doing a really nice job learning the playbook and getting in it like he should.

“You can see some of the former quarterback traits come out at times. He can be a little out of control because he’s not used to running routes.”

However, Coen likes his intangibles. He started all 58 games in his four-year prep career. His team went 52-6, won two state titles, and lost in the title game once.

Quote of the Week: “I knew a lot about this fan base growing up. It’s always been a dream to play for a blue-blood (program) ever since I was a child. After I received an offer from them and I committed, I knew the fans would show a lot of support,” freshman guard TyTy Washington on Kentucky fans.

Quote of the Week 2: “That’s tough to say, hard to know. I think they’re all pretty talented, pretty special. Who makes a certain kind of play when that opportunity presents itself, that’s hard to predict. I’m just glad I’m going to have a front-row seat to see who those guys are,” Kentucky assistant Orlando Antigua on what basketball player could be a fan favorite next season.