Watch the Oscars with this overhaul of classic party mix 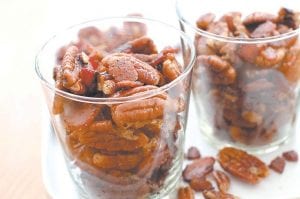 This photo shows an offering of spiced bacon pecans for an Oscar party. Once the bacon is nice and crispy, all you have to do is toss in some pecans and a mess of seasonings. (AP Photo/Matthew Mead)

Don’t even think about serving that old classic “party mix” at your Oscars party on Sunday, February 28. This isn’t an 8-year-old’s birthday party. This is red carpet material, even if it’s in your living room.

So it’s time to class up your party mix act. And with this recipe for spiced bacon pecans, you’ll have no trouble. We start with bacon because, well, because all good things start with bacon. Once the bacon is nice and crispy, all you have to do is toss in some pecans and a whole mess of seasonings. A bit of brown sugar ties it all together.

Not a fan of pecans? Peanuts, cashews or walnuts would be just as delicious.

In a large skillet over medium heat, cook the bacon until almost crispy. Add the pecans and toss to coat thoroughly, then cook, stirring frequently, until evenly toasted, 2 to 3 minutes.

In a small bowl, combine the cinnamon, cayenne, salt, pepper and brown sugar. Toss with the bacon and pecans and cook for another minute. Spread out on the prepared baking sheet and allow to cool fully. Store in an airtight container at room temperature.