Watching Apollo 7 from the White House 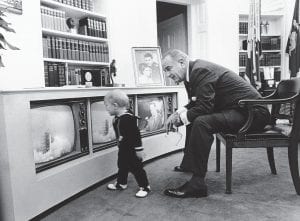 President Lyndon Johnson and his 1-year old grandson, Lyn Nugent, were interested spectators in Washington as Apollo 7 was launched at Cape Kennedy on October 11, 1968. They were watching a replay of the actual launch. A photograph of the president’s eldest daughter, Linda, and her husband, Marine Capt.. Charles Robb, is atop television set at right. The capsule carrying Apollo 7 astronauts R. Walter Cunningham, Commander Walter Schirra, Jr., and Donn F. Eisele splashed down in the Atlantic Ocean at 7:11 a.m. on October 22, 1968. The now-historic flight was the first successful manned mission of NASA’s Project Apollo. Its purpose was to test all systems necessary before a lunar mission could be attempted. The flight is also noted for completing the first live television broadcast from an American spacecraft. (AP Photo/The White House)