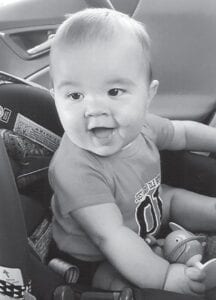 FIFTH GENERATION — Eight-month-old Ryder James Rhoads is the son of Rayson and Katie Rhoads of Alabama. His grandparents are Rob and Lisa Swagert of Alabama, and his great-grandmother is Jane Albright, also of Alabama. He is the great-great-grandson of Lizzie Mae Wright of Mayking and the late Rev. Melvin Wright, and is the fifth generation living in Lizzie Mae Wright’s family.

Hello everyone! As I start this column it is so peaceful to sit on the porch to watch the birds as they come to the feeder for breakfast. There’s a whole wide world, well a portion of it anyway, yet it seems like there are several of the same birds that will be at the feeder waiting for my son Keith to put fresh seeds in the feeder each morning.

There are five young woodpeckers, and they will keep you entertained as they can’t seem to get along at all. Two are starting to develop red on their heads.

One of the woodpeckers likes to eat with the others as it will come down the tree and start calling to the other. I named it Sue, since my niece Sue Hall doesn’t like to be alone. I don’t know if this woodpecker is a boy or girl, so I may be like Johnny Cash who recorded a song called “A Boy Named Sue”.

I’ve read and heard for years that when a cardinal appears, it is a sign from someone you love coming to visit. However when my friend Betty Ison passed away, a cardinal would fly to the exact spot on the fence for several days. 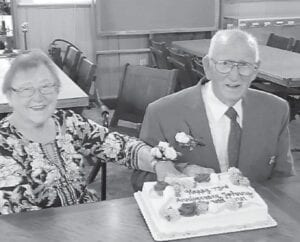 About a month ago after Vickie Power and I went to Doyle and Betty Ison’s cemetery, again a cardinal appeared, except this time in a few seconds a female red bird appeared. At times the female will appear and it isn’t long before the red cardinal arrives also.

I named them Doyle and Betty. While sitting on the porch each morning sitting for a spell, I always wait for the red birds before I come in the house.

I love to see the bluejays. Occasionally there’s a female with them. They are so sleek and beautiful. I was lucky enough to see a young bluebird.

The doves are so beautiful in flight as they spread their tails like an open fan.

Now you’ve had your break from the world as we know it today.

The saying time waits for no one rings so true, as half the month of August has slipped away. Just a few months and the cold, icy weather will be taking its toil on everyone. 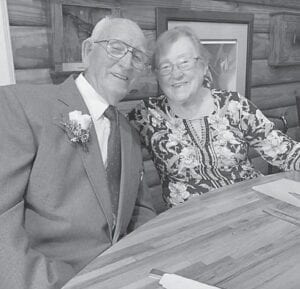 Belated happy anniversary to Johnny and Ann Calihan celebrating 73 years of marriage and happiness together. “It is no secret how I love this couple,” says southern Ohio correspondent Rose Ballard.

At least with all this coronavirus pandemic, with it starting in spring lingering into summer, now we will be facing fall next month. We have been able to enjoy outside in the yard and garden if you were fortunate to have one or both, then, as stated winter, is not far away.

Since the accident a year ago, I’ve sort of gotten used to being home. I should rephrase that statement and write since Carcassonne and Campbell’s Branch Community Centers are closed. If the centers were still open I would be going at least once a month and probably more, even though I can’t dance.

As far as being confined I really don’t mind too much, as I have spent more time in my yard this summer than I have in a long time. Each time I walk out to the back deck I see the three tomato plants that my son Keith Ballard bought, how they have flourished under his loving care, along with a gorgeous plant that Ann Calihan gave me for my birthday in May. It is so large that it covers the corner of the deck, even growing in between the railings that you can see out in the yard.

One day I picked two tomatoes, although they aren’t real large, they are beautiful and I tasted a bite. They are called Bonnie, as Keith didn’t know about names of tomatoes, the same with lettuce.

Again I will say thanks Nina Craft for the pack of lettuce seed she sent me is still growing. I can pinch the leaves off and in a couple of days there are more grown back. In a week or so I will plant the pack of Black Seeded Simpson so I can have lettuce this fall, or until Keith gets tired of it. A small bunch of onions from Kroger’s and hot bacon grease does the trick.

If anyone ever tells me they can’t find something as simple as a pack of seeds or whatever, you can bet your bottom dollar, if there’s any way possible I will do my best to send it to them.

Several years ago a friend, sent me a shoebox of pawpaws, as I had been seriously ill at that time. I remembering laughing as the pawpaws had been wrapped in newspaper and the smell was so wonderful as I lifted the lid on the box.

Happy belated 73rd anniversary to a special couple whom I adore, Johnny and Ann Calihan.

Saturday evening their granddaughter Julie made reservations at a nice restaurant for just the family. Since there were several of them, they had to sit in two different rooms because of social distancing. A nice time was had by all. Afterwards they went to a place in Miamitown so they could enjoy the beautiful cake in private.

It seems I’ve been on the road again. Friday evening a new group, Sassy Sisters, performed at Fernbank Golf Course, which is just about 20 minutes from where I live. Trina Emig, who used to be with Ma Crow & The Lady Slippers, is one of the members of Sassy Sisters.

When I first arrived of course someone I knew, Steve Brown, hollered at me. We talked about the movie Mountain Minor. It seems I have competition as Steve revealed he had watched the movie about 20 times. It is so good to see someone you know when you attend a musical event, as if I don’t always see several, as I am such a gadabout.

Steve asked me join him and his group, but I declined as I had my own comfortable chair. I wanted to sit somewhere I could enjoy the music without wearing a mask.

Just as the music was about to start, someone came up to speak to me, Ray Rechenberg, whom I’ve known several years. Ray is with a group called Sacred Harp & Shape Note Singers. I hadn’t seen Ray for quite some time until last year in August, when the group had an appearance at Calvary Campus in Letcher County.

I was spending the weekend at the campus, and Ray Rechenberg was singing with the group. Ray is an admirer of the movie Mountain Minor also.

Saturday morning Jericho Old Time Band did their usual appearance at Farmers Market at Oxford. It had been two weeks since I had been there, so of course I had to go. The road that I travel to get to Oxford is under construction, and it seems that I am becoming accustomed to finding my way.

Now if I can figure out how to go visit Hayward Day, as I promised him a visit some time ago. Hello Hayward, I may try to head your way.

Hello Mike and Marcia Caudill, I am enjoying my magazine very much. Thank you for being so thoughtful.

While reading about Isom Days, I don’t understand how this event can go on, as Mountain Heritage is cancelled along with Blackey Days, just to name two. So would someone be kind enough to explain this to me?

Then when you are finished explaining, tell me how abortions clinics are essential, when churches have been closed? Liquor stores are so essential, yet places like churches that hold AA meetings were closed. There wasn’t any place in this area where meetings were held.

Some things just don’t make sense to me. In case you are wondering, yes this matter is very relevant to me.

Hello Les and Pat Wagner, I hope things are going better for you.

As usual I am running late, so until next time, Rose Ballard, 9110 Lawrenceburg Rd., Harrison, OH 45030, email: Bluegrassmama4@aol.com.