Water shortage watch in effect for Letcher, 60 other counties 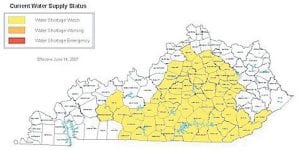 With much of Kentucky suffering one of the driest periods on record in more than 110 years, the Environmental and Public Protection Cabinet has issued a water shortage watch for Letcher County and 60 other counties in the state.

People living in the counties under the watch are asked to be aware of the current drought situation and prepare to make adjustments to their use of water.

A water shortage watch is issued when drought conditions have the potential to threaten the normal availability of drinking water supply sources. Officials at the Kentucky Division of Water (DOW) study rainfall amounts, reservoir levels, streamflows, the Palmer Drought Index and the Drought Monitor when determining drought status.

Dr. Stuart Foster, state climatologist, said precipitation deficits for the past four months place all four climatic divisions among the driest periods on record since 1895. Drought conditions across Kentucky range from moderate to severe.

The National Drought Mitigation Center indicates that severe agricultural and hydrologic drought conditions have developed south of a line stretching from Calloway County in the west to Jessamine County in central Kentucky and continuing southeast to Letcher County.

Drought outlooks from the Climate Prediction Center indicate that extreme and exceptional drought in Alabama, Mississippi, Georgia and Tennessee will persist to our south and that drought will continue to build here in Kentucky.

Record-low daily flows are being measured in areas of the Green, Barren, Salt, Upper Cumberland and Kentucky River basins. A reversal of current climatic conditions is needed to mitigate these low flows and replenish declining water supplies in rivers and reservoirs. Thunder- storms were forecast for Letcher County yesterday (Tuesday), but dry conditions were expected to return for the rest of this week..

Foster said that while it is certainly possible that the general weather pattern that has led to the current drought situation will change and bring beneficial rains, those who manage and depend upon water supplies should prepare for the possibility that the current drought conditions could intensify rapidly.

“Water suppliers in the 61- county watch area and throughout the state should closely monitor their supply sources and notify the Division of Water as water shortages occur,” said Bill Caldwell, Kentucky DOW.

For information about current drought conditions in Kentucky and water conservation measures visit the Division of Water Web site at www.water.ky.gov/ wateruse/drought/.

The following counties are under the water shortage watch: