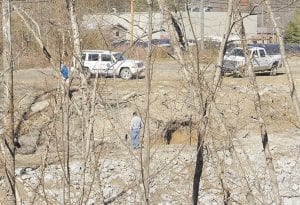 State officials say this site beside the North Fork of the Kentucky River at Ermine will continue to be tested for contaminants until it is “completely remediated.”

A spokeswoman for the Kentucky Department of Water says a “minuscule amount” of contaminants were found in water samples taken in Whitesburg last week after a consumer advisory was issued for customers of the Whitesburg Municipal Water System.

An order was issued November 1 keeping customers from using water for anything other than flushing commodes after some customers reported smelling gasoline in their water and a petroleum byproduct was found seeping into the North Fork of the Kentucky River at Ermine, about one mile above the intake to the city’s water plant.

Allison Fleck, communications director with the Kentucky Division of Water (DOW), said results from the tested water samples showed that the contamination levels were “well within the acceptable range.”

“None of the tests were that bad,” said Fleck. “It did not show a reason for great concern. It was never dangerous from the tests we saw.”

Fleck said testing was done to see if toluene and xylene — hydrocarbons associated with petroleum products — were found in those water samples.

Fleck said the amount of hydrocarbons found in the water samples were “almost not even detectable,” but said the DOW has “refined test ing equipment” that detected .0005 parts per million of toluene and xylene.

“We did not find them in any kind of levels that are mentionable,” said Fleck.

Fleck said the non-consumption advisory was necessary until tests were conducted to find out what exactly was in the water system.

“You can’t be too cautious,” said Fleck. “Whenever there is a suspicion of anything harmful you shut it down. There was just no knowledge early on how much had seeped until testing determined that. The water never was dangerous to drink but we did not know that at the time.”

Sandy Gruzesky, DOW director, said every precaution was taken to protect the public from harmful contaminants.

“Considering the nature of the pollutant source, it was appropriate to suspend water production and distribution until test results demonstrated the problem was solved and no contaminants remained in the water,” said Gruzesky.

Fleck said a delay occurred in declaring the water safe to drink because early samples did not follow the DOW’s exact protocol in pulling samples from sites, transporting them and getting those samples to the laboratory in Frankfort. She said the DOW treats water samples like evidence and follows a chain of custody.

“It did warrant for other tests,” said Fleck.

It also took a considerable amount of time to do the normal second round of testing, Fleck said.

Fleck said DOW employees from Frankfort spent about five hours on November 5 collecting 20 water samples at various locations near the water intake. Those samples were driven to Frankfort and tests were conducted on those samples all day on November 6.

On November 6 at about 6 p.m., DOW lifted the water consumption advisory after the second round of water samples indicated the water did not contain contaminants that exceeded personal exposure limits or drinking water standards.

The DOW consulted with the Kentucky Department for Public Health to reach the decision to clear use of the water for drinking and all other purposes.

As water use resumed, consumers were being advised to flush pipes for several minutes if they detect an unusual odor to the water. If the odor persists, they should contact their water company for assistance.

“Taste and odor are not harmful, but chemicals in the water are,” said Fleck. “It would not be unusual to have a residual fuel odor still working its way through the system. As the system continues to be flushed, the odor may be smelled for the next few weeks.”

The Kentucky Environmental Response Team was activated to respond to the emergency and cleanup efforts at the site of the petroleum seepage are continuing.

Guy Delius, director of the Division of Public Health Protection and Safety at the Kentucky Department for Public Health, said he supported the decision to lift the advisory.

“We worked with the Division of Water and the Division of Environmental Services to review the sample results and remove this advisory as quickly as possible,” said Delius. “Our first priority has always been the health of our citizens.”

When a problem is detected, immediate testing and retesting requirements go into effect along with public notification that consumption has the potential of serious adverse effects on human health as a result of short-term exposure, according to the DOW.

A consumer advisory is issued when there is a possibility that consumption of water produced by a water treatment plant may be harmful to human health.

Fleck said the DOW will continue to monitor the Whitesburg water system on a daily basis until the site is “completely remediated.”

Whitesburg Mayor James W. Craft said workers have flushed the lines coming into the water system and a carbon filtration system is being installed.

Craft said that given the length of the non-consumption advisory, “all in all people were very understanding. They never blamed us and never got out of hand with us.”

Responding to complaints about a lack of information concerning the non-consumption advisory, Letcher County Judge/ Executive Jim Ward said “we couldn’t inform the people because we didn’t have any information to inform them. The only thing we could go by is what the DOW told us. We didn’t even know any of the results of the tests.”

Craft said the emergency with the Whitesburg water was something over which that neither he nor Ward had any control.

“It was dumped in our lap,” said Craft. “We did what we had to do in terms of the consumption of drinking water. The state has now done its job. The judge did his job and I did my job.

“The findings of the Department for Environmental Protection regarding the source of contamination are now public and that was their job to perform not ours,” said Craft.

Craft said he is just glad that the system is up and going again.

“You can drink the water,” said Craft. “It’s safe across the board.”