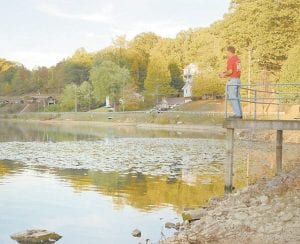 Chris Deskins, a firefighter from Millard in Pike County, enjoyed a day of fishing over the weekend in a depleted Jenkins Lake. The platform of the fishing dock on which Deskins is standing in this photo is usually at least two feet closer to the water. Jenkins Mayor Charles Dixon said recently that the lake has been dropping two inches each week during the current drought. Last week, Dixon declared the city under a “water shortage alert,” making it illegal for residents to wash vehicles, water lawns, or use water in reflective pools or fountains until the drought is over. (Photo by Chris Anderson)