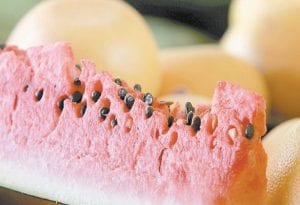 Watermelons contain an ingredient called citrulline that can trigger production of a compound that helps relax the body’s blood vessels, similar to what happens when a man takes Viagra, said scientists in Texas. (AP Photo/Tony Gutierrez)

A slice of cool, fresh watermelon is a juicy way to top off a summer cookout and one that researchers say has effects similar to Viagra – but don’t necessarily expect it to last all night long.

Watermelons contain an ingredient called citrulline that can trigger production of a compound that helps relax the body’s blood vessels, similar to what happens when a man takes Viagra, said scientists in Texas, one of the nation’s top producers of the seedless variety.

Found in the flesh and rind of watermelons, citrulline reacts with the body’s enzymes when consumed in large quantities and is changed into arginine, an amino acid that benefits the heart and the circulatory and immune systems.

“Arginine boosts nitric oxide, which relaxes blood vessels, the same basic effect that Viagra has, to treat erectile dysfunction and maybe even prevent it,” said Bhimu Patil, a researcher and director of Texas A&M’s Fruit and Vegetable Improvement Center. “Watermelon may not be as organspecific as Viagra, but it’s a great way to relax blood vessels without any drug side effects.”

“It sounds like it would be an effect that would be interesting but not a substitute for any medical treatment,” Wehner said.

The nitric oxide can also help with angina, high blood pressure and other cardiovascular problems, according to the study, which was paid for by the U.S. Department of Agriculture.

More citrulline – about 60 percent – is found in watermelon rind than in the flesh, Patil said, but that can vary. But scientists may be able to find ways to boost the concentrations in the flesh, he said.

Citrulline is found in all colors of watermelon and is highest in the yellow-fleshed types, said Penelope Perkins-Veazie, a USDA researcher in Lane, Okla.

She said Patil’s research is valid, but with a caveat: One would need to eat about six cups of watermelon to get enough citrulline to boost the body’s arginine level.

“The problem you have when you eat a lot of watermelon is you tend to run to the bathroom more,” Perkins-Veazie said.

Watermelon is a diuretic and was a homeopathic treatment for kidney patients before dialysis became widespread.

Another issue is the amount of sugar that much watermelon would spill into the bloodstream – a jolt that could cause cramping, Perkins-Veazie said.

Patil said he would like to do future studies on how to reduce the sugar content in watermelon.

The relationship between citrulline and arginine might also prove helpful to those who are obese or suffer from type-2 diabetes. The beneficial effects – among them the ability to relax blood vessels, much like Viagra does – are beginning to be revealed in research.

Citrulline is present in other curcubits, like cucumbers and cantaloupe, at very low levels, and in the milk protein casein. The highest concentrations of citrulline are found in walnut seedlings, Perkins-Veazie said.

“But they’re bitter and most people don’t want to eat them,” she said.