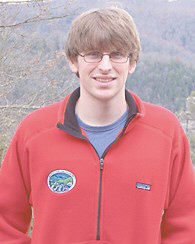 The Appalachian Coal Country Watershed Team (ACCWT), a joint initiative of the U.S. Office of Surface Mining Reclamation and Enforcement, and Volunteers In Service To America, has announced an addition and a change to its staff in Letcher County.

The Head of Three Rivers Project, which recently applied for federal nonprofit status as Headwaters Inc., is a local watershed group dedicated to improving water quality and the economy in Letcher County. The group was formed in 2005 when an OSM/VISTA, Evan Smith, was first assigned to Letcher County. Smith is now president of Headwaters Inc. The Head of Three Rivers Project takes its name from the fact that three rivers — the Kentucky, the Cumberland, and the Big Sandy — all have head- waters in Letcher County.

Liebe is a 2008 graduate of Maryville College with a degree in environmental studies. Originally from the Nashville, Tenn., area, Liebe now lives in Whitesburg. He will continue water quality and trail system projects already underway here.

Adams, of Isom, will be responsible for recruitment, training and support of other ACCWT positions in Kentucky, including The Head of Three Rivers Project in Letcher County, the Left Fork of Middle Creek Project in Floyd County and Appalachia Science in the Public Interest, which is monitoring creeks near the Kentucky-Tennessee border in McCreary and Whitley Counties. Adams will also provide support for OSM/VISTAs in southwest Virginia and Tennessee until coordinator positions there can be filled.

The ACCWT has 55 watershed groups and 32 OSM/VISTAs spread out over the eight Appalachian coal producing states. Its headquarters is in Beckley, W.Va.