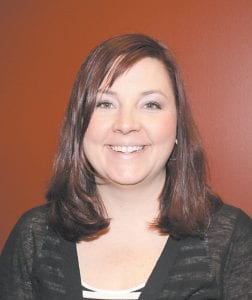 Watts, who is currently working to obtain her doctorate in Educational Technology from Morehead State University, earned her bachelor’s and master’s degrees from Eastern Kentucky University.

Before joining the staff at HCTC, Watts worked at Hospice of the Bluegrass as a Provider Liaison; was an adjunct instructor at Southeast Kentucky Community and Technical College; served as Director, Educator and Lead Media Trainer at the Appalachian Media Institute, a project of Appalshop; worked at Lotts Creek Community School and Cordia High School as Art and Media instructor; Coordinator of the Appalachian Minute at EKU where she coordinated radio programs for WEKU, an National Public Radio affiliate that covered issues that eastern Kentucky communities face; and did a stint at EKU as a Media Assistant in the Training Resource Center.

Watts grew up in Blackey along Highway 7. She and her husband, Bruce, have have a 3-year-old son, Finnegan.

Watts attended HCTC as a student 12 years ago.