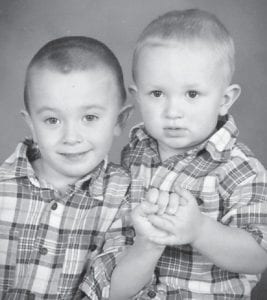 Michael Watts and Caleb “C.B.” Baker competed in the Cabel’s Collegiate Big Bass Bash on April 5 and 6 for the Alice Lloyd College fishing team, which Michael started four years ago. They caught several fish and weighed in two each, but did not place.

The ALC team placed second in an earlier tournament at Chickamauga, Tenn., back in March.

Lavada Cornett celebrated her birthday on Sunday, April 6. She is 77 years old. Holly Bentley is her granddaughter. Holly is friends with my daughter, Morgan. Her birthday was April 7.

Connor Cade turned two years old on April 3. He had a party on Saturday, April 5, at Dorton Park. He is my grandson. His parents are Fredrick Eversole III, and Tiffany Webb Eversole of Pikeville. His papaw is Fredrick Eversole Jr. of Whitesburg. Collin Cruz Eversole helped out by reaching his brother his presents.

Carolina Rayne Eldridge turned six months old on Friday, April 4. As you can tell she is ready for spring. I am truly blessed with three grandbabies.

Mike and Donna Watts of Mill Branch rode his Harley over to visit with me last Sunday.

Micca and Eli Gordon of Shelbyville spent a few days with Donna and Mike Watts. They were on spring break this past week.

I was so glad to hear that in 2015 teachers will get a 1 percent raise, and in 2016, a 2 percent raise. Teachers spend more time with the children during the school year than the parents do! I feel it’s long overdue.

Continue to pray for John Williams’s family. Earlene is a good friend of my aunt, Susan Caudill Stamper of Lexington.

Also continue to pray for the family of Shelia Hogan. I worked with her sister, Glenna Miles, one of the sweetest person I have ever known in my life. Shelia was a good nurse, too.

Death is so final. I personally think the only way to deal with it is to always keep the memories going. I think the more you talk, the more you release the heartache, maybe tears, laughter, or even a beginning to healing.