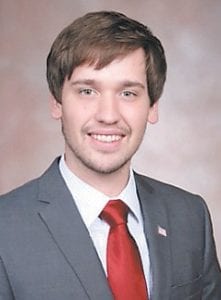 Michael R. Watts II, of Whitesburg, graduated with a Juris Doctor degree at The Appalachian School of Law commencement ceremony, held on Saturday, May 6.

While at ASL, Watts’s activities included being a member of the Student Body Association, a Justice on the Honor Court, a member of the Lions Club, the Master of Ceremonies of the Esquire Society, and completing over 100 hours of community service. In addition, he was the cochampion of the school’s Spring Moot Court Competition, a Dean’s list recipient, and a Book Award winner.

Watts plans return home to serve of the people of Letcher County while working at the Letcher County Attorney’s Office. He also plans to open a private law practice upon admittance to the bar.

A 2010 Valedictorian of Letcher County Central High School and 2014 graduate of Alice Lloyd College, Watts is proud to have spent his entire educational career close to home and by remaining in the mountains. He is the son of Mike and Donna Watts of Roxana.