W’burg awash in the sound of Summer Winds 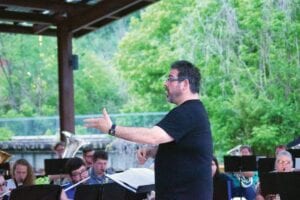 There’s an unexpected sound drifting across Whitesburg this spring.

There’s the boom-boom of kettle drums, the lilting song of flutes and the smokey tones of the saxophone. Stop and turn an ear, and listen to the deep toot of a tuba, the regal flourish of French horns, and the jazzy wail of trumpets. Sometimes an oboe will take the lead, other times it’s the rata-tat-tat of a snare.

The sound isn’t the thin, offkey cacophony of the Mayberry Marching Band, it’s the full-throated harmony of 72 — count ‘em — community musicians blowing their own horns and beating their own drums under the shelter of the solar pavilion at Appalshop.

The musicians are members of the KYVA Summer Winds ensemble, an orchestral group made up of professionals, retirees, college students, and music educators, all out to tell COVID-19 they’re done with it, and ready to move on to the next verse.

“I used to play in jazz bands back in the day,” said Ron Flanary, who drives from Big Stone Gap, Va., to blow his trumpet with the group. “When I retired from my real job, I started doing this.” 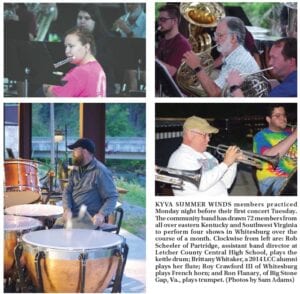 Flanary is former director of the LINOWISCO Development District in Virginia. He’s one of a wide variety of community members represented in the Summer Winds. Roy Crawford, of Whitesburg, is a semi-retired engineer and one of several playing French horns. Jason Bailey, of Wise, Va., a trumpeter, is marching band assistant at the University of Virginia at Wise. Logan Martin of Whitesburg is a chemical engineering major at the University of Kentucky, and a member of the college’s marching band. Tara Brown, band director at Leslie County High School, drives all the way to Whitesburg to play her oboe.

“We could not have done this without Southeast and Appalshop,” Griffith said.

Last night, Tuesday, was the first concert for the group, but it will have one every Tuesday at 7 p.m. for the next three weeks. He said the band was a way for people to get back into the mood for music after a year of COVID-19 where orchestras were superspreaders and school bands couldn’t practice or perform. Only two of members of KYVA Summer Winds are in high school, but several are in college. People were starved for something to do and someone to be with, Griffith said.

“We’ve just been blessed,” he said. “Music programs at colleges and high schools are struggling because of the pandemic.”

Five weeks ago, he put out a call for musicians, and had 50 within the first few days. It continued to grow until there are now 72 members. Some are music instructors in Letcher County, some are former students of Griffith, others are just people in the community who never lost their love of music.

Brittney Whitaker graduated from Letcher County Central High School in 2014 and majored in music, but she left Western Kentucky University after two years and came home to Whitesburg.

“It had been a couple of years since I picked up my instrument, and then I ran into to him (Griffith), and he asked me if I want to play.”

Logan Martin also went to LCCHS, though he is at the University of Kentucky now. He said he knew there were some things going on with music in Whitesburg and while orchestras were starting to become popular in other places, it hadn’t reached here yet.

Trinity Adams, also an LCCHS alum, will be a sophomore at UK this fall in the pre-veterinary program, and also plays in the marching band. She said it was amazing to come home and find the band forming “especially after COVID.”

It’s a family affair for Rob and Tracee Scheeler of Partridge, whose two daughters are the youngest members in the orchestra. Rob, on drums, is assistant band director at LCCHS and Tracee, on flute, is the music teacher at Cowan Elementary.

“I’ve got kids that I taught in the mid-2000’s that I haven’t seen since high school (who are in the orchestra),” Rob Scheeler said. “I couldn’t imagine, living here, and there being an orchestra.”

While he and Griffith may know many of the people in the band, few of the band members know the others. Flanary, who grew up in Benham in Harlan County, said he’s familiar with the area, but not the other people.

“We don’t know each other, but we all speak the same language,” he said.