W’burg council declines to cut booze tax in half 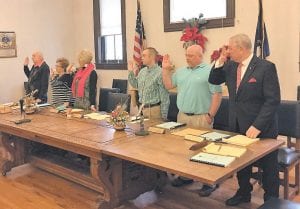 In a four-to-two vote, the Whitesburg City Council voted down a request to cut the excise tax on package liquor and beer in the city by half.

Sandy Hammock, owner of Big Daddy’s Liquors in Whitesburg, made the request during a council meeting on Tuesday. Hammock said she felt the tax rate, four percent on spirits and three percent on beer, is excessive and believes she could sell more alcohol if taxes were lower. She asked the council to reduce each rate by half, making the tax on spirits two percent and the tax on beer one and a half percent.

Mayor James Wiley Craft told Hammock the decision would lie with the council, but added that the entire police department budget is funded by the city’s excise tax on alcohol and said the earlier removal of the three percent tax on food at establishments that serve alcohol had already cut the alcohol tax fund by about half. At the March meeting, Mayor Craft told the council it was only fair that people who came to restaurants that sold alcohol should not be required to pay tax on food as well as alcohol. He said this was particularly true if they did not purchase alcohol.

Whitesburg Police Chief Tyrone Fields told the council that Hammock’s request, if approved, would impose a severe financial hardship on the department, and would probably result in money being taken from the general fund to pay for police equipment. Fields said the tax has permitted the Whitesburg Police Department to equip itself with the best radio system in eastern Ken- tucky. He added that the cost for one uniform and gun belt, without a gun or Taser, is about $600 per officer for the six-member force. He said the addition of a sidearm and Taser adds another $1,800.

“It would be a huge hit for us,” said Fields.

Mayor Craft told the council the alcohol tax serves as a pass through, going straight into the police budget, and if it was to be reduced, the taxpayers would have to make up the difference. He said it would affect the broader budget and added that Whitesburg has one of the finest police departments in the region.

Council Member Robin Bowen Watko asked how the cuts would affect the current budget, which was passed earlier in the year, and Craft said it would have to be amended, and that other budget items would be amended too. Outgoing council member Sheila Shortt made a motion to cut the taxes by half and Councilman Derek Barto seconded. The roll call vote was four to two against the motion, with Barto and Shortt voting yes and James Bates, Robin Bowen Watko, Earlene Cornett, and Larry Everidge voting no.

In other business, the council voted to renew the franchise agreement for Kentucky Power Co. to supply electricity to the city for 20 years, and to accept a 25 percent reduction in the city’s rates on streetlights as compensation. Mayor Craft said the reduction would save the city between $7,000 and $8,000 a year. After hearing the franchise read in full by Greg Sparkman, district manager of the Hazard Kentucky Power District, the council voted unanimously to approve the motion to renew the agreement and accept the rate cut on streetlights. The other option for compensation was a straight one percent fee to the city, which Sparkman said would net about $4,000 a year and would be added to customers’ monthly bills. The council had agreed that it did not want to see additional costs placed on customers’ bills at the October meeting. The council did not meet in November, because of the election.

Paul Nesbitt of Nesbitt Engineering, who works with the city on infrastructure and other matters, reported that his office is continuing to work on acquiring funding for the rebuild of the city water plant and the renovation of the Daniel Boone Hotel. Water Maintenance Manger Chris Caudill reported that city workers have repaired 24 water-line leaks in the last five weeks and said the pipes ranged from three-fourths of an inch to eight inches. He said some of the leaks were from the pipes being pulled apart as the ground dried out in the recent drought. Caudill said it will cost about $8,000 to make the necessary repairs.

The council voted unanimously to approve a $25 gift card for each first responder, each city employee, and each council member. The cards will be purchased at a local grocery store and be used for Christmas expenses. Craft also praised the city employees and volunteers, who he said made last week’s Christmas Parade a resounding success.

Council member Sheila Shortt stepped down from her seat after she didn’t place in the top six vote getters in the recent election, and Mike Jackson, who was among the winners, took her seat. The other members, James Bates, Robin Bowen Watko, Earlene Cornett, Derek Barto, and Larry Everidge, are unchanged. Letcher Circuit Judge James W. Craft II swore in the group and the council, guests, and city employees adjourned to the fire hall for a turkey dinner.