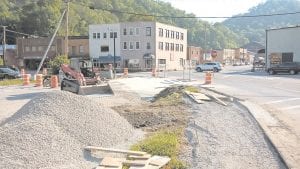 NEW INTERSECTION UNDERWAY — Contractors for the Kentucky Highway Department were expected to finish concrete and paving work on a new intersection in downtown Whitesburg this week. Workers were moving two parking lot entrances at the intersection at the foot of College Hill, and installing a sidewalk. Striping and signage will finish the realignment. Some had promoted a roundabout for the location, but engineers said there is not enough room for a roundabout there. (Photo by Sam Adams)

The Whitesburg City Council has conducted the first reading of its fiscal year 2018-19 budget, totaling $4.54 million.

The balanced budget addressed at the council’s regular May meeting calls for revenue and expenditures of $3 million for the city’s general fund and an additional $1.54 million for water and sewer for a total of $4.54 million. This represents an increase of $731,460 over last year’s general fund allocation of $2,268,540. The council will conduct the second reading of the budget ordinance at its next meeting. The budget will then become law after it is published in The Mountain Eagle.

In a related matter, Mayor James Wiley Craft announced that the city’s 2017 audit is now complete. This catches the city up after four years when audits were not completed. The council voted unanimously to approve the audit.

Craft announced that after a long wait and some cost cuts that changed the project’s scope, work was beginning on the new entrance into Whitesburg from College Hill to Main Street and Railroad Street. Craft said the work would be done in a less intrusive manner than a plan that was presented at a meeting with engineers from the Kentucky Department of Highways (DOH) last May. At that time, a plan to was proposed to accommodate funding cuts from the state that would have changed the entrance to the city parking lot. Craft said if that design had been followed, it would have an adverse effect on the Farmers’ Market and the Letcher County Veterans Museum.

Craft also announced that City Clerk Garnett Sexton had informed him she will retire on May 31, after serving for 32 years as city clerk. Craft said Sexton would be missed and announced that Jessica Keene of Whitesburg has been hired to fill the position. Keene holds an associate’s degree in business from Bluegrass Community and Technical College, where she was graduated with a grade point average of 4.0. The council authorized her to sign documents at both Community Trust Bank and Whitaker Bank. Craft said that Keene is already bonded.

Water Maintenance Manager Chris Caudill addressed the council and reported two leaks, one at the Whitesburg Swimming Pool and one at Letcher County Central High School. He added that several problems at the Whitesburg Wastewater Plant have been resolved, and that one pump had to be pulled before it caused a more expensive issue. The plant was recently inspected by the state and Caudill said he had received a letter from the state stating that everything was us to standard. He added that the $65,000 gear installed in the wastewater plant was performing well.

Craft also reminded the council and the city that the first of 10 free Leavitt AMP Concert Series shows will be held on May 31 at the Mountain Heritage Festival Stage in Whitesburg. The show features Kentucky Hal l of Fame inductee Larry Cordle, who joins forces with emerging singersongwriter and guitarist Dave Adkins. The opening act, Sunrise Ridge, will begin at 6 p.m., and the main show will go on at 7 p.m.

Following its success in a highly competitive on-line national vote, Whitesburg was chosen as one of 15 recipients of $25,000 grants from the Leavitt Foundation for concert presentation. A full listing of all 10 concerts is available at concerts. levittamp.org/whitesburg.

In other business, Craft reported that the “cruisein” approved the council approved last month will be moved to the third Saturday of each month and will be done in partnership with City of Pikeville. Whitesburg resident Michael Blair has volunteered to look into the possibility of a city monument for fallen soldiers, firefighters, and police officers to be placed at the Letcher County Veterans Museum. All emergency first responders will be listed on it.