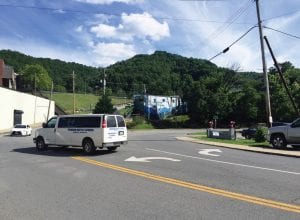 The Whitesburg City Council voted Tuesday night to accept the state’s plan to redesign this three-way intersection at Main Street and the foot of School Hill. The intersection also connects with the exit/entrance ramp to the Whitesburg bypass.

A new entrance from the KY 15 bypass into downtown Whitesburg can be constructed without having to give up space at the city parking lot that fronts the Letcher County Veterans Museum and serves as home to the Mountain Heritage Festival, the Whitesburg City Council learned Tuesday night.

At the June meeting of the Whitesburg City Council, Chris James, design supervisor for the Kentucky Transportation Cabinet’s District 12 office in Pikeville, and other highway department employees told the council that because of budget reductions, the Transportation Cabinet sought a low-cost solution for fixing the traffic problem at the three-way intersection where Main Street and School Hill meet the existing bypass ramp. James said a proposal he brought to last month’s council meeting was unchanged except to allow the entrance to the city parking lot to remain the same.

James did propose a second entrance to the lot along the bypass road, but after he told the council it would take about 50 feet of space, the council and Mayor James Wiley Craft agreed that the city cannot afford to lose that much space in the lot, which is also used for the Whitesburg/Letcher County Farmers Market. Craft said that because the city is a beautiful place set between two mountains with a river running through its center, space is always at a premium.

The council voted unanimously to accept the proposal. Sam Hale, branch manager for District 12, said the entire project should take around eight weeks to complete. He said his office will make certain that the contractor works with the city and Mountain Heritage Festival to keep disruptions to a minimum. Hale said any work that can be done at night would be, so that it will not disrupt traffic or interfere with other activity.

How to fix the bypass ramp has been a question for the Transportation Cabinet and the city since before January 2015, when the Cabinet unveiled a controversial plan to build a traffic roundabout at the location. At that time, the state legislature had allotted $650,000 to the project. The final cost was not discussed Tuesday night.

Craft conducted the reading and told the council the city will end the fiscal year with a surplus of between $225,000 and $230,000. He said the city has paid its debts and purchased several pieces of new equipment as well. Craft said a special called meeting will be held before the end of June so the budget can be finalized by the last day of the 2016-2017 fiscal year and added that audits for 2013 and 2014 are finished and the audit for 2015 will be complete soon. He said when they are ready, all three will be presented together, and that the city will be caught up on its audits very soon.

Water Maintenance Director Chris Caudill told the council there are still problems with pumps at sewer lift stations. He said the main pump at the Western Auto lift station had to be rebuilt and several smaller ones were either rebuilt or replaced. Caudill said the smaller pumps usually cost about $1,400 and if it costs over $600 to rebuild one, he buys a new one to get the warranty. Caudill said one problem area may have come from a bad fuse in an American Electric Power line that could have caused several pumps to fail. Caudill said the matter is being looked into determine if it is AEP’s fault and added that the power company has taken care of the situation.

The council voted unanimously to allow the Letcher County Central High School tennis team to use the city courts July 14-16 for the Whitesburg Tennis Classic. All proceeds will go to the LCC boys’ and girls’ tennis teams and sponsors of more than $50 will have their name included on the tournament T-shirts. The council also voted to allow a 5-K run to take place July 29 with registration beginning at 8 a.m. The race will begin at 10 a.m. Whitesburg Police Chief Tyrone Fields reminded the council it had voted against closing the streets on Saturdays to keep from interfering with local businesses, and Mayor Craft said Fields can work out the details for use of the city track to keep from interfering with the Farmers Market on Saturday morning.

Annette Napier of the Kentucky River Area Development District reported that three companies, Richardson Associates of Whitesburg, Codell and Pogue Engineering of Lexington, and Cornerstone/ Pogue of Louisville, have submitted bids to provide architectural and engineering services for the Daniel Boone Hotel stabilization project. Napier said all three submitted proposals and suggested the mayor appoint a committee to study and rate them. Mayor Craft appointed council members Mike Jackson, Larry Everidge and Earlene Cornett to the committee. Craft said he hopes the committee can have a report on the proposals by the called meeting for the second reading of the budget.