W’burg food pantry is on borrowed time in current location; others have closed 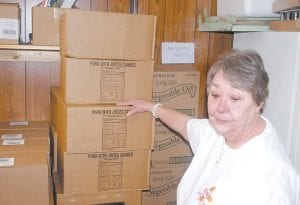 NO ROOM IN THE PANTRY – Vicki Holbrook, who runs the Letcher County Food Pantry, said because of increasing needs of the community, the nonprofit organization is out of space in the house it has used for years, and needs to relocate. The organization had to turn down a truckload of food recently because there was no place to put it. (Photo by Sam Adams)

The non-profit corporation, which started nearly 40 years ago, is looking for new space to handle the ever-increasing need, after food pantries in Neon and Jenkins had to close.

The pantry has operated for years out of a house next door to First Baptist Church in Whitesburg. The church owns the house and lets the Food Pantry use it rent-free, but the church has plans to build a “life center” on its campus, and the house will be torn down once enough money is raised to build it. Bolling said the church isn’t ready to build, but Pastor Tony Brown, who serves on the Food Pantry board of directors, has told them it’s getting close to having enough money, and the Food Pantry should begin looking for a new home while there’s still time.

Board members have talked to businesses and to County Judge/ Executive Terry Adams, but buildings that are in reasonably good condition are in short supply.

“ We’ve looked and we’ve looked, and we just haven’t been able to find anything,” secretary/ treasurer Harold D. Bolling said.

The nonprofit, which provides emergency food supplies to the poor using donated food and government commodities, needs to move anyway, Bolling and Vicki Holbrook said, because it doesn’t have enough space for the added clients it is serving, and the electrical system in the century-old house won’t support the refrigerators and freezers that are needed to store perishable food.

“God’s Pantry gave us a nice big freezer, and I was scared to death it would blow our electrical system,” Bolling said.

Holbrook, a retired teacher who runs the pantry on a day-today basis, said the building still has “knob and tube” wiring, a system that was in common use in the U.S. between 1880 and 1930. There is no ground in that type of electrical system, and the National Electrical Code now forbids it in new construction except for certain applications in industry and agricultural use.

Because of the wiring, the pantry has disconnected all of the baseboard heaters in the house, and doesn’t even have hot water.

“We use a lot of Clorox,” Holbrook said.

In addition to the tiny restroom, the building has four rooms: An office; a small room for putting together emergency food packages that is crammed with food donated by Walmart, Food City and others; a small storage room for individual-donated food items; and a large room where the freezers and packaged foods are kept. Holbrook said another freezer has been promised to them, but they don’t dare hook it up.

“Jenkins has another freezer we could use, and it will come to us, but I’m afraid to plug it in because I’m afraid we’ll burn the building down,” she said.

Most of the clients the Food Pantry serves are elderly people living on $771 a month, most of whom get no food stamps at all. It’s difficult or impossible for many of those in need to even get to the Food Pantry, and some can’t walk up the gravel hill from the First Baptist Church parking lot, said Holbrook.

She said they need a larger building with a modern electrical system and a level parking lot, located somewhere between Mayking and Dry Fork. Those are the basic necessities, she said, not counting things they’d like to have.