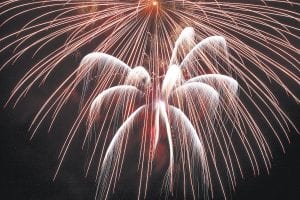 The City of Whitesburg was forced to cancel some of its July 4 celebration festivities because of stormy and wet weather, but the fireworks show went on as planned and has drawn praise for being one of the best ever. (Photo by Thomas R. Biggs)

The City of Whitesburg will not raise property tax rates this year.

At its July meeting, the Whitesburg City Council conducted the first reading of an ordinance that keeps the tax rate for real and personal property at $.37 per $100. Mayor James Wiley Craft told the council the tax rate would remain unchanged and no vote will be required until the second reading is conducted at the next council meeting.

In other business, Police Chief Tyrone Fields reminded people who live and work in Whitesburg that city stickers are now on sale. Fields said the stickers came from the supplier a little late but they are in City Hall now and the cost is $8 each and two for $15. Senior citizens may purchase two for $12.50. All Whitesburg residents and everyone who works in the city limits will be required to have a sticker for each vehicle. Fields said he will take stickers to businesses in the city to allow people to purchase stickers and enforcement will begin in about a month.

John Back, representing the Whitesburg Masonic Lodge, approached the council and asked its permission for the lodge to hold a car show on August 17. The show will last from 4 until 8 p.m. Back asked for the city’s cooperation and said the lodge will provide entertainment and would like to make it an annual event. He said it’s a reflection of the Masonic Lodge’s commitment to become more involved with the city as well as a fundraiser for the new lodge building. The council voted unanimously to approve the event, which takes place the same evening as a five kilometer (3.1 mile) run/walk to raise funds to allow the assistant pastor at the First Baptist Church, Jonathon Berry, and his wife, Reagan, to adopt a child from the Congo. Back said he is aware of the run and the car show will be over by about 7:30 p.m. and can serve as a lead in to the other event, which begins at 9 p.m. The council approved the request unanimously.

Water Maintenance Director Chris Caudill was not at the meeting, but Chief Fields told the council he is aware that several Whitesburg water customers had called in recently to complain about brown water in their taps. Fields said he had looked into the matter and found that members of the Whitesburg Volunteer Fire Department had conducted tests of fire hydrants in the city, which disturbed sediment and caused the situation. Fields said that while the brown water in taps is unpleasant, it is necessary to check the pressure in the fire hydrants on a regular basis to make sure there is adequate water pressure in the event of a fire.

Mayor Craft told the council that the entertainment for the city’s Independence Day celebration had to be canceled because the sound technicians had been afraid the moisture would damage their equipment. However, the fireworks display did go on and Craft said it was one of the best he has seen. He praised the Whitesburg Volunteer Fire Department for the show.

Craft was also enthusiastic about the Farmers Market held in Whitesburg last Saturday, calling it an overwhelming success. He said it was well attended and had a good variety of produce that will only get more diverse as the season goes on. The Farmers Market will take place every Saturday in the city parking lot by the Letcher County Veterans Museum.

Councilman John Williams told the council that the fence at the basketball courts near the Whitesburg Swimming Pool has some damage along the top and Mayor Craft said he would look into the matter. Council member Robin Bowen Watco said she had received a call about the gate separating the picnic area and the pool and there is a gap big enough for children to slip through to the pool, but not large enough to allow an adult to go after them, Craft said he will address that as well.

Williams said the city looked great for the July 4 celebration and said he believes things are going in the right direction. Craft said the goal is to make the city a tourism center even in hard economic times.

“You have to crawl before you can walk,” said Craft. “The goal is to make Whitesburg into a destination city.”