We can all agree on this: Robocalls are a scourge 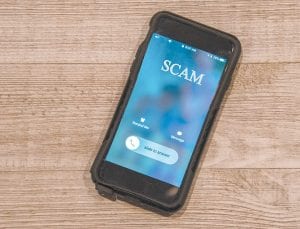 I oversee the care of an ailing man who’s pushing 90. When I’m with him, the sound of his phone ringing sends a minor shock to my system. And his phone is ringing all the time.

“That’s probably a robocall,” he says, obviously aware that these autodialed spam and scam calls are usually up to no good. He knows deep down not to give personal information to a stranger on the phone, but sophisticated fraudsters sometimes don’t sound like strangers to him.

Americans received an estimated 48 billion robocalls last year, 17 billion more than the year before. Only 1 in 5 served a useful purpose, such as a reminder of a doctor’s appointment.

Though robocalls make everyone nuts, they are a menace to the elderly. Cognitive decline can lower one’s defenses against scams. Older people are often trusting and generous. They may be lonely and thus susceptible to a friendlysounding voice. (Some recordings do a very good job mimicking real conversations, complete with pauses and background noise.) This group is more likely to have landlines, which offer fewer options for blocking robocalls. That’s why its members heavily populate the “suckers lists” maintained by criminal enterprises.

And the cons are oh-so-clever. They may start with officialsounding words, such as “Our records show that your doctor has ordered a …” Their come-ons often promise “free” stuff, say, a medical alert system, or help paying for drugs. To get the “bargain,” the victims must provide personal or financial information, which is what the sharks are really after.

Another robocall tactic is to issue threats, often from someone claiming to work for a government agency. The callers may warn of unpaid tax bills for which the person answering could be arrested. Or they may scare the mark by saying his or her Social Security number could be at risk. Again, the prize is access to bank account information, a Social Security number or a credit card.

Until recently, the technological defenses have been few. Crooks have tricks to make a call look local on caller ID. Some use numbers impersonating legitimate businesses or institutions.

In his prime, my friend worked as a reporter who asked hard questions of everyone. But somewhere in his 80s, he lost his edge. At the same time, he’s proud and he doesn’t want anyone, his caregivers included, to think that he can’t handle his affairs.

And he really does need to monitor the phone. A call could be from his brother or his doctor. It could be the drugstore telling him that his pills are ready.

When people do answer the phone, however, they get designated as “live,” making them a more attractive target for robocallers. The pest calls then multiply.

My friend is, of course, on the National Do Not Call Registry. That just stops reputable telemarketers from calling (not in itself a bad thing). Some service providers now put spam alerts on suspicious calls. But even though that saves folks the trouble of answering, they still have to stop what they’re doing and look at the noisy phone.

Bipartisan legislation in Washington could finally put a nick in the robocall plague. It would boost penalties on robocallers engaging in fraud and require telecommunications companies to strengthen spam-call filters. Thank you, Sen. Ed Markey, Democrat of Massachusetts. Thank you, Sen. John Thune, Republican of South Dakota.

Tech experts say the con artists will find new ways to get around any roadblocks. OK, but let’s at least slow them down before we destroy our phones.