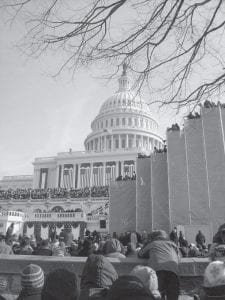 The view from our seat on the west side of the U.S. Capitol.

Last week The Eagle found itself with a press pass for the 56th Presidential Inauguration in Washington, D.C.

While we will spare you the boredom of making you look at all of the photographs we took which show that we had one of the best seats in the house (or one of the best cold metal slabs on the frozen tundra better known as the west side of the U.S. Capitol), we hope you don’t mind that we are publishing at least one, even if it is in black and white.

Despite the numb fingers and numb toes which resulted from being outside for several hours in unseasonably cold temperatures (and the sore feet we continue to endure from having to walk a very unaccustomed number of miles), we continue to grow more thankful each day that we were able to have a bird’s eye view for the inauguration of the first black president in the history of the United States, Barack Obama.

We also continue to grow more impressed by the fact that as many as two million people showed up for the historic event without a single arrest being made. We will never forget seeing images of former President George W. Bush appearing on a Jumbotron and being greeted with boos from way in the back, only to be stopped as cold as the frigid weather by black people in the front who were working hard to remind everyone that the purpose of 1-20-09 wasn’t to criticize the past, but to celebrate a future that hopefully will bring an end to the economic hardships and other critical issues now facing our great country.

Being able to see and hear Mr. Obama take the oath of office to become our 44th President of the United States now ranks high with a couple of other events we thought we would never see in person, but did in our earlier years through the efforts of family and friends — being on a beach at Titusville, Florida to watch the launching of Apollo 11 on July 16, 1969 (the first manned space mission to land on the moon), and being at Riverfront Stadium in Cincinnati to see the great Hank Aaron tie the legendary Babe Ruth’s home run record when Aaron hit No. 714 on April 4, 1974.

Being a part of our country’s latest great history left us able to even conjure up a smile when we read on The Rural Blog, a favorite Web publication of ours, that the executive director of the Kentucky League of Cities, Sylvia Lovely, was worrying that Obama might not live up to his “uniter” reputation and reach out to poor, white, aging and rural communities.

If President Obama really wanted to ignore communities like those to which Ms. Lovely refers, his staff never would have seen to it that The Mountain Eagle and other small publications had a great seat from which to view history being made. After all, Letcher County voted against Obama in November by a margin of three to one and this paper still got a good seat for his inauguration. If Obama and his team held grudges, newspapers from communities such as ours would never have been invited to Washington last week.

Meanwhile, those who seriously are afraid that President Obama will ignore communities like ours should take comfort in the fact that a top Kentucky Democrat with strong family ties to Letcher County, Lt. Gov. Daniel Mongiardo, has announced that he will once again try to unseat Republican Jim Bunning as Kentucky’s junior senator.

Like O bama, Mr. Mongiardo, a ph ysician from Hazard, is a pragmatist who knows that ignoring communities like ours would be political suicide.