‘We Shall Overcome’ singer lived in Blackey

By PHIL PRIMACK and MIKE CLARK 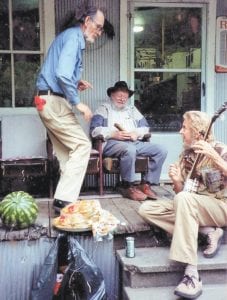 Folk musician Guy Carawan (right) was photographed at the C.B. Caudill Store at Blackey in the early 1970s. Joe Begley is at right. (Photo by Phil Primack)

Most of the world rightly remembers Guy Carawan as the lanky, soft-spoken folk musician and social activist who introduced “We Shall Overcome” to America’s civil rights movement a half century ago.

But folks living in the lower end of Letcher County in the early 1970s may also recall Guy, who died on May 2 in New Market TN at the age of 87, as the tall fellow playing banjo on the porch of the C.B. Caudill Store in Blackey.

Guy, his wife Candie and their two young children lived in the little house behind the store. That put them at the hub of Blackey life, with many an hour spent with Joe and Gaynell Begley, who inspired and drew activists from Letcher County and beyond seeking to halt the devastation of strip mining and black lung. Just as important — maybe even more so — to Guy and his family, life in Blackey also meant lots of potlucks, square dances at Carcassonne, and easy jam sessions on the store’s long porch, next to which an old tire hanging from a tree became the favorite swing of young Heather and Evan Carawan.

The Carawans lived in Blackey for about a year in 1971 and were regular visitors thereafter. Guy’s official purpose for being in Blackey was to oversee students in the Appalachian field study program of Pitzer College in California. The students lived with families in Letcher and other eastern Kentucky counties, exposing them to the region’s struggles but also to its strengths and vibrant culture. Guy’s students were based at community centers, health clinics, and other strong organizations that worked with and for local people, such as Eula Hall’s Mud Creek Clinic in Floyd County and Marrowbone Folk School in Pike County, with Edith and Jake Easterling.

“Those students really got a great education,” Candie Carawan told The Eagle last week. “But living in Blackey was also a central part of our own education about the mountains. We lived in a number of places but it was a rare treat to live in Blackey, which was so close to the nitty gritty of coal. The impact of Joe and Gaynell’s involvement with strip mining was an incredibly eye-opening experience.”

And while Guy would regale all comers with his fine skills on the hammered dulcimer, banjo, and other instruments, he was far from the only picker in town. Candie recalls her son Evan, now an accomplished hammered dulcimer player himself, as a fourth grader in Blackey taping one of Blackey’s own banjo master, Austin Miller, playing and talking about his music. “Blackey was one of those moments in time when you feel incredibly lucky to learn what you were learning,” says Candie. “It became one of our home bases and made a huge impression on the whole family.”

Guy Carawan was born in Santa Monica, California on July 28, 1927 to southern roots — his mother was from South Carolina and his father was from North Carolina. After high school in Los Angeles, he earned a bachelor’s degree in math at Occidental College and a master’s at UCLA in sociology while also performing folk music, an interest that began with a folklore course at Occidental and was fed by his exposure to the recordings of Pete Seeger, Woody Guthrie, and others. In 1953, Guy joined folk singers Ramblin’ Jack Elliott and Frank Hamilton on a road trip that included a stop at what was then called the Highlander Folk School in Tennessee. Highlander taught leadership skills to labor, civil rights, and other activists, often using music as both inspiration and organizing tool. After hearing Dr. Martin Luther King speak about the changes coming to the South, Guy decided to return to Highlander in 1959 to take over the school’s music program.

In April 1960, Carawan taught civil rights protesters several songs, including “Eyes on the Prize” and “I’m Gonna Sit at the Welcome Table.” But by then, Guy had made his own changes to a song with original roots in black churches that had been revised by Seeger and others. “We Shall Overcome” captivated and captured the attendees that day, just as it has at countless places for countless causes ever since. “It was so hopeful, so beautiful,” Candie, who met Guy at that conference, would tell an interviewer. “It was electrifying.” Guy sang it again at the founding convention of the Student Nonviolent Coordinating Committee the next year. “We Shall Overcome” became the anthem of the civil rights movement as a result of Guy’s educational work with leaders of SNCC.

Guy and Candie were married in 1961 in Claremont, CA, where she was a student at Pomona College. Guy taught at Pitzer College in Claremont from 1967 to 1972, which led to his time in Blackey. He returned to Highlander around 1973 to carry on the music program. He and Candie immediately produced a book of photos, songs, and oral histories called Voices from the Mountains, which is now regarded as an iconic statement about the role of folk music and protest songs in central Appalachia. Guy introduced activists and musicians alike to the concept of using traditional music as a form of political protest.

The Carawans produced a long catalog of books and records that captured the power of community and activism. An amazing musician himself, Guy had an impact upon several generations of songwriters and singers. He was most proud of his role in preserving music and documenting how it could be used to educate people about problems such as black lung, strip mining, war, and civil rights. He and Candie are much beloved by many community leaders in Appalachia and the South because of their skill in preserving and protecting the ability of Americans to sing out about their hopes and desires for a better life.

Phil Primack and Mike Clark are both former Mountain Eagle reporters. As director of the Highlander Center, Clark hired Guy Carawan to be the center’s music director in 1973.