We should be able to handle the tooth

Have you met the tooth fairy? I have. She is skinny, has glasses and is cheap. She writes a column in this very newspaper. She thinks a tooth is worth $1 in a plain white envelope (unsealed so it can be used again if it’s not too crumpled). And sometimes, after the kid has lost a few teeth already, she “forgets,” and there’s nothing under the pillow.

There are probably a lot of fairies out there who are far more generous and creative than I … uh … she. But that’s today’s point: The homegrown, DIY, seat-of-her-tutu tooth mom is suddenly facing big fairy.

A consortium of toy executives has created the Royal Council of the Real Fairyland, which they hope will start replacing parents and their piddling envelopes. The group is also legally registered as The Real Tooth Fairies LLC, which has got to conjure up a mental image of the Real Tooth Fairies of Atlanta, New York and Orange County cat fighting it out as they flit above a canopy bed. Tune in tonight to see which fairy’s getting lipo! Which one obviously has a drinking problem? (And we’re not talking fluoride.) Which one is spitting mad at the other fairy for sleeping with her prince? “Oh, right, you were just putting a dime under his pillow. Why did it take you all night, you witch?! You’re still in the gown you were wearing yesterday!” 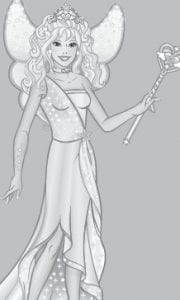 Twinkle is the leader of The Real Tooth Fairies. This image was captured from the website www.therealtoothfairies.com

Come to think of it, that’s a show I actually would pay to see — or at least get cable for.

But anyway, the toy execs truly hope to license these real fairies and make them the must-haves of the missing-tooth set. The idea is to get kids to expect not just a homemade card or a couple of bucks but a toothbrush, a doll, a game, a website and maybe even a party, all featuring these licensed characters, who look like standard-issue princesses — lots of hair, mascara, wings and high heels. Hey! That’s just like the real housewives, too — except for the wings.

Now, living in America and appreciating the entrepreneurial spirit that has made this country great (if wacky), I can understand why the businessfolk want to get this idea off the ground. What they see before them is low-hanging fruit: a beloved but copyrightfree character with built-in repeat business potential. Each tooth lost equals revenue gained! But what they seem to be forgetting is that the tooth fairy is beloved because she’s not a licensed character.

She exists not as an anorexic Barbie with hair extensions and an enamel addiction. She’s the person you kind of think could be your mom (or dad) but you kind of think is something else. My son, 15, just told me he’d thought “she” was a sparkly light. His friend says he thought the fairy was a guy. Yeah, a guy with wings.

When imaginary characters get licensed bodies, it’s hard for kids to dream up their own versions anymore. Just as it’s hard to think of Santa as a bald man from Barbados, once you get an image in your head — or culture — it kind of crowds the other images out.

That’s why I’m hoping The Real Tooth Fairies go the way of most of the women on the first season of “The Real Housewives of Orange County.” Seen them anywhere?

Only in your dreams.