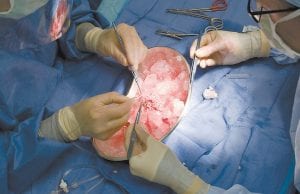 This file photo shows doctors working on a kidney recently removed from a donor at a hospital in Portland, Oregon. A study released this week finds that wealthy people are more likely to get on multiple waiting lists and score a transplant, and less likely to die while waiting for one. (The Oregonian via AP)

You can’t buy hearts, kidneys or other organs but money can still help you get one. Wealthy people are more likely to get on multiple waiting lists and score a transplant, and less likely to die while waiting for one, a new study finds.

The work confirms what many have long suspected — the rich have advantages even in a system designed to steer organs to the sickest patients and those who have waited longest. Wealthier people can better afford the tests and travel to get on more than one transplant center’s waiting list, and the new study shows how much this pays off.

“It’s a rational thing to do” from an individual patient’s point of view, but it raises fairness questions, and the policy should be reconsidered, he said.

He led the study and gave results this week at an American Heart Association conference in Orlando.

The United Network for Organ Sharing, or UNOS, the agency that runs the nation’s transplant system under a government contract, assigns organs based on a formula that considers medical urgency, tissue type, distance from the donor, time spent on the waiting list and other factors.

UNOS has considered banning or limiting multiple listings three times, most recently in 2003, said spokesman Joel Newman. But some people think patients should be free to go wherever they want to improve their odds, and UNOS now requires that transplant centers tell them about this option.

“It takes money and knowledge … traveling can make a huge difference in how quickly you get an organ,” said Robert Veatch, a medical ethicist at the Kennedy Institute of Ethics at Georgetown University and a longtime member of the UNOS ethics committee who thinks the policy should be changed.

“Steve Jobs is the classic example,” he said. The former Apple chief was on a transplant list in Tennessee and received a new liver at a hospital there in 2009 even though he lived in California. It’s not known if he was on more than one waiting list, however.

Patients on multiple lists often must pay for a new set of tests, which can range from $23,000 for a kidney to $51,000 for a heart, one study estimated, plus be able to get local housing or travel on short notice if an organ becomes available.

An Internet database— the Scientific Registry of Transplant Recipients — gives average wait times, success rates and other details on every transplant program in the nation.