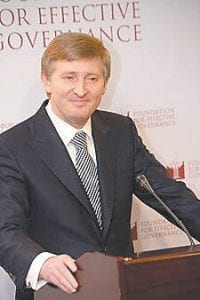 More than 300 coal miners in Letcher and Knott counties are going to work for the richest man in Europe.

Metinvest Group, a mining and steel-making company based in the country of Ukraine, announced that it is acquiring 100 percent of United Coal Company (UCC), whose subsidiary Sapphire Coal Company has extensive mining operations in Letcher County and one underground mine in Knott County.

Metinvest is owned by 42-yearold Ukranian billionaire Rinat Akhmetov, whose net worth of $31.1 billion accumulated since 1991 is said to make him the wealthiest man in Europe.

Both Metinvest, the largest steel company in Ukraine, and Teays Valley, W.Va.-based United Coal are privately held. While the price of the sale was not part of the announcement made last Thursday, the deal is believed to be worth between $800 million and $1.4 billion.

The Financial Times of London reported that the Dragon Capital investment bank in Ukraine said the purchase price was somewhere between $800 million and $1 billion. The Reuters news service reported the price as being between $1 billion and $1.4 billion. Reuters also said the cost was down from the $2.4 billion Metinvest was expecting to pay when its plan to acquire United Coal was included in antitrust filings made public in Bulgaria six months ago.

Sapphire Coal Company is headquartered near Isom and was formerly known as Golden Oak Mining (twice), Reading and Bates Coal, and Cook and Sons Mining before United Coal bought it out of bankruptcy in December 2005. Sapphire operates a large preparation plant and high-speed load out at Camp Branch, deep mines at Sandlick and UZ, and a strip mine at Buck Creek. The company’s Advantage deep mine is in Knott County.

While Sapphire is now producing well over two-million tons of high-Btu steam coal each year, Metinvest said its “key rationale” for buying United Coal was the company’s “significant reserves of high quality metallurgical coal” at its Carter Roag, Pocahontas, and Wellmore subsidiaries in West Virginia and Virginia.

Metinvest said UCC’s metallurgical coal will help it produce higher quality coke and improve the quality of the steel it makes.

“Metinvest is constantly looking for opportunities to improve our effectiveness and enhance the quality of our products,” said Igor Syry, the CEO of Metinvest Holding LLC. “A higher quality of coke is especially critical in today’s environment, when Metinvest is reducing consumption of natural gas as a result of the increase in gas prices.”

Syry also announced that Metinvest plans to keep United Coal’s current management team in place, including Michael Zervos, CEO and president of UCC. Keith Hargrove has been president of the Sapphire subsidiary since last summer.

“We are extremely pleased with the agreement reached to acquire United Coal Company, and that we will be able to partner with the management team they have assembled,” said Syry. “… We intend to maintain the existing business model of UCC, working closely with its excellent management team and employees. One of the things that attracted us to UCC was that they had managed to grow production quickly since 2005, and that they had several opportunities for additional expansion in the near term that matched our needs. Metinvest will continue to invest in the company in order to increase production.”

“We at United Coal are very excited about the transaction,” said Zervos. “That Metinvest trusts our management team to continue to run the company in the manner we have built it means everything to us. We have dedicated ourselves to building a world class producer of metallurgical coal, while keeping an unwavering focus on our core principles of employee safety and respect for the environment. That foundation of our company will not change. As we built the company, however, we saw that in order to maximize our growth opportunities, we would have to partner with an integrated steel producer so that our coals would have a sales outlet even in challenging market conditions. We believe that this transaction is a great outcome for all stakeholders in UCC, and we look forward to helping Metinvest achieve its goal of becoming the most efficient global steel producer.”

“We are trying to apply a consistent approach to our strategy, to form an efficient and balanced metallurgical company, which will be a major player in the European and world markets,” said Syry. “Having assets in the United States, the world’s most stable supplier, and having access to the world class mining methods employed by UCC with its tremendous record of and dedication to safety is a transformational step for Metinvest. This transaction positions us well for the rebound of world markets.”

As of December 31, 2007, UCC’s proven coal reserves, as defined by U.S. Securities Exchange Commission standards, totaled 160 million clean metric tons of coal, 82-percent of which were metallurgical coal (coking coal and coals used for pulverized coal injection (PCI). UCC estimates that it is one of the five largest metallurgical coal reserve holders in the Central Appalachian region.

The principal shareholder of United Coal is The United Company, a private holding company based in Bristol, Va., with diversified interests including energy holdings.

Akhmetov wields considerable social and political influence in Ukraine, which is Europe’s second largest country. Ukraine was a founding republic of the Soviet Union, but became independent when the U.S.S.R. dissolved in 1991.

Ukraine has its own sizable reserves of bituminous and anthracite coal reserves, but imports the majority of its tonnage, most of which is used to make iron and steel.