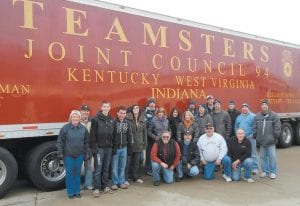 Members of a non-profit organization in Michigan are braving bad weather and cold economic times to deliver Christmas presents to a dozen Letcher County families this week.

This marks the 10th year Letcher County native Mary Martin Hendrian and her family have helped people in the county where she grew up. Mrs. Hendrian’s father died when she was three years old, leaving her mother to rear nine children. She moved to Michigan after she graduated high school and married, but always wanted to give back to the community that helped her when she was a child.

“I’ve been married to Mary for 36 years,” said Jim Hendrian. “She has been back here every year. She loves it here. Mary has always had it in her heart to give back. It makes her feel good that she can help her hometown that helped her.”

Mrs. Hendrian and her cousins, Janet and Henry Madden created the organization Emergency Aid for Children to help make the dream come true.

“Janet and Henry are such giving people,” said Jim Hendrian. “They jumped right on board.”

The Hendrians and Maddens work closely with the Family Resource and Youth Service Center (FRYSC) in each school in the county to make sure families are given what they need.

The two families raise money throughout the year and ask their neighbors and co-workers in Michigan to help buy Christmas presents to bring to Letcher County. They normally give presents to 30 to 40 families, but were forced to cut the list down by more than half this year because of the increase in unemployment caused by a continuing slump in the auto industry.

The Hendrians missed work this week to deliver food, toys and furniture to 12 families in Letcher County and two families in Knott County.

“The families got stuff got a lot,” said Mrs. Hendrian. “The people who adopted (to buy gifts) really went all out.”

Jim Hendrian said the people who were able to help provide gifts spared little this year given the poor economy.

“We thought we got a pretty good response to be able to serve 14 families,” said Jim Hendrian. “Things are bad all over the country, but they are really bad in Michigan. It’s not because they didn’t want to help. It’s because of economics they weren’t able to help.”

Mrs. Hendrian said the group has been considering stopping the Christmas giving program, but doesn’t know if she is ready to stop.

“We don’t want to give it up,” said Mrs. Hendrian. “We said this was our last year but we’ll see. We have to re-evaluate it.”

Jim Hendrian thinks they will return to give presents next December.

“I don’t think this will be our last year,” he said. “If people that have supported us over the years continue to support us, we will be back next year.”

Volunteers unloaded two semi tractor-trailer trucks full of gifts, new and used furniture and appliances Sunday morning. One of the trucks was donated by USF Holland Trucking from Holland, Mich. Expenses and drivers were donated by the company. Drivers for this year’s trip are Bob Udavich, Eric Brant and Dan Benson of Teamsters Local 299.

Benson is inspired by the generosity of the Hendrians and Maddens.

Another truck was donated for use by Teamsters Local 651 out of Lexington and driven by Shively Pierce of Lexington. The Teamsters have contributed to the program for the last eight years.

Mrs. Hendrian hopes she is inspiring children who are getting gifts now to want to give back when they grow up to others who will be in need.

“If we can make a difference in just one family’s lives it is all worth it,” said Mrs. Hendrian. “The family we visited (Monday) made the trip worth it.”