Webb selected to HIDTA board 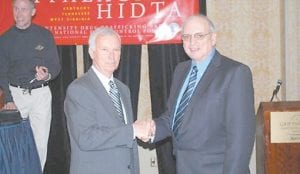 Six years later, in February 2008, the federally funded agency finally accepted Letcher County as the 25th of the now 28 Kentucky counties included in the three-state organization, which is funded through the Office of National Drug Control Policy. Last week, Webb was selected to serve as a member of the AHIDTA Executive Board.

The AHIDTA Executive Board is made up of federal, state and local law enforcement leaders from 68 counties in Kentucky, Tennessee and West Virginia. Frank Rapier, director of the Appalachia HIDTA, said that Webb, who will be representing the Sheriff ’s Association in all three states for a term of two years, was selected because “of his hard work and dedication as the Sheriff of Letcher County as well his dedication to the mission of the Appalachia HIDTA.”

Although marijuana is its primary focus, officers involved with Appalachia HIDTA have been actively fighting the illegal sale of prescription drugs in the region.

During the last two years, the sheriff ’s department and Kentucky State Police have teamed with HIDTA to make 11 major drug busts in Letcher County, with each case involving multiple defendants.