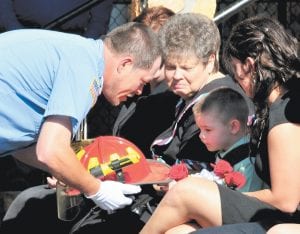 A Neon volunteer firefighter presents Mike Webb’s fireman’s helmet to Webb’s son, Cameron Michael Webb, during a memorial ceremony Saturday at Millstone. Hundreds turned out to honor Webb, a longtime firefighter and teacher, after Webb died April 27 at his Goose Creek home, shortly after returning from an emergency call. He was a member of the Neon Volunteer Fire Department for 27 years and a teacher and bus driver at Fleming Neon Elementary School. He is survived by his wife, Debbie; two daughters, Tamara Brooke and Brittany Nicole; and son Cameron Michael. (Photos by Chris Anderson)

Funeral services for an elementary school teacher and firefighter were held Sunday at the Millstone Missionary Baptist Church.

Michael Conley Webb, 46, of Goose Creek, suffered a massive heart attack hours after he had responded to an all-terrain vehicle (ATV) wreck at Millstone on the night of April 26.

A second grade teacher at Fleming-Neon Elementary School and a school bus driver, Webb had been a high school basketball coach for fourteen years.

Webb, who had served as the captain of fireground operations of Fleming-Neon Fire and Rescue for the last three years, had been a member of fire department since 1984.

Tony Fugate, Fleming- Neon Fire and Rescue assistant chief of fireground operations, who responded to the ATV wreck with Webb, said he was a good firefi ghter.

“He was always willing to help somebody,” said Fugate. “He was a great person. He would help anybody in any way he could.” 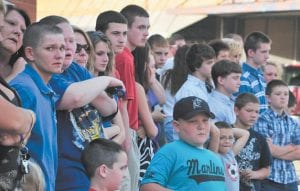 Mourners lined up on Main Street in Neon to say good-bye to Mike Webb.

“He loved the kids at that school,” said Fugate. “When we would go to Bristol he would get them lugnuts.”

“If he didn’t know you, he could sit and talk to you for thirty minutes,” said Fugate.

Wallace Spanky Bolling Jr., an emergency medical technician with Letcher Fire and Rescue, described Webb as a likable guy who was always good for a laugh.

“He was very dedicated to his job whether it was as a teacher or firefighter or whatever he was involved with at the time,” said Bolling. “He loved his family and was all the time talking and bragging about them.”

Webb was a graduate of Pikeville College and was of the Baptist faith. 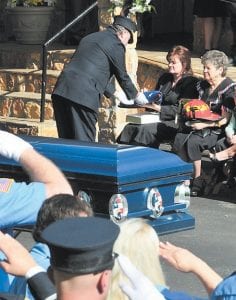 A folded American flag was presented to Debbie Webb, the widow of longtime Neon Volunteer Firefighter Mike Webb, while firefighters from around eastern Kentucky offered their respect.

“He is truly going to be missed by a lot of people and never forgotten, that is for sure,” said Fugate.

Webb was preceded in death by his parents, Conley and Lola Wright Webb and a daughter, Ashley Danielle Webb.

Burial was in the Wright- Collier Cemetery.