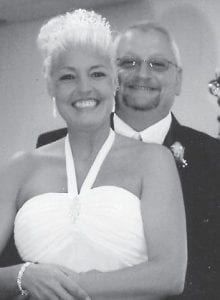 Andrea Lynn “Susie” Tackett and Anthony Wilson Baker were married July 4 at First Wesleyan Church in Lenoir, N.C. The ceremony was performed by the bridegroom’s brother, the Rev. James Baker. She is the daughter of Richard and Patricia Adams of Jeremiah and the late Raymond Tackett, and granddaughter of Mr. and Mrs. Paul Prince of Jackhorn and the late Mr. and Mrs. McKinley Tackett and Pressie Adams of Jeremiah. He is the son of Mr. and Mrs. Doyle Baker and Mr. and Mrs. Oliver Jarrett, all of North Carolina. After a honeymoon, the couple will reside in Morgantown, N.C.