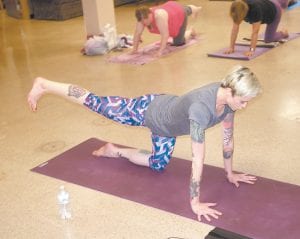 ONE YEAR OF YOGA — Kelli Hansel Haywood leads a free yoga class at the Harry M. Caudill Library in Whitesburg. Haywood said student donations helped her achieve a higher certification as an instructor. The class has between 10 and 30 students every Monday night. (Photo by Sam Adams)

Five years ago, one would be hard pressed to find anyone in Letcher County who knew what padmasana is.

Now between 10 and 30 people take the cross-legged position every Monday night to start their yoga class at the Harry M. Caudill Library in Whitesburg. They’ve been doing it for a year, completely free.

“We provide some mats and props, so all they have to do is get themselves here, which is really a big deal because yoga is usually a highend exercise,” instructor Kelly Hansel Haywood said. “The same kind of class in Pikeville costs $12 a class.”

There’s an old saying that politics and religion should never be discussed in polite company, and Haywood said that’s how it is in the yoga class.

“There are people in this room who would never be in the same room together otherwise,” she said.

Haywood said most yoga classes are broken down by age or degree of difficulty. The Whitesburg class has students from 12 years old to 75, men and women. Some students have to have a prop or a chair to do exercises, and one class a month is dedicated to teaching those people how to continue to stay fit despite their disability.

Haywood said she began learning yoga in 2010 and has used to help her manage chronic illnesses. In the process, she said, she has lost more than 100 pounds.

After getting hooked on yoga, Haywood became a certified yoga instructor, and now teaches in Whitesburg, Pikeville, Hazard and Norton. She said she wanted to increase her level of certification, but was dreading the financial cost of doing it.

“I couldn’t afford it on my own. I was going to have to take out a credit card to pay for it,” she said. She got a small grant from the Mountain Association for Community Economic Development, but it still wasn’t nearly enough.

“I just put out a donation jar here (and in the Hazard class) and it was completely paid for — travel, meals everything,” she said.

She said that support from her class made her even more determined to keep going and offer as much as possible with the free classes. Many of the students are people she has known all her life, and she said it feels good to be able to help them become fit and stay that way.

“I have my fourth-grade teacher (in class),” she said. “She comes every Monday, so I’m able to give back to her.”

Born and reared in Whitesburg, she is a daughter of Mike Hansel and Leslie Amburgey, and a granddaughter of the late Luther Johnson, whose Cowshed Trading Post at Isom was known far and wide until his death in the early ‘90s.

She is married to musician and artist John Haywood, and the couple have three daughters ages 5, 10 and 12. So far, only one seems to have her mother’s love of yoga.

“The older two are resistant to it, I think because I like it, but the younger one is into it. She likes to pretend she’s teaching me,” Haywood said.

With another generation waiting in the wings, yoga might just stick around in Whitesburg.