Weeks of safety training pays off

Three to the rescue 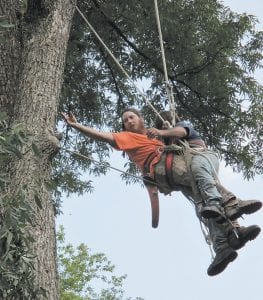 For tree cutters Bryan Adams, Andrew Isom and Trevor Noble, there was nothing extraordinary about the first hours of their workday as it unfolded on the morning of July 23.

However, that would soon change.

As the three members of Asplundh Tree Expert Company’s Crew 300 went about their jobs clearing trees from beneath power lines in the Mayking community of Cram Creek, they received word that large tree.

The call for help came from the City of Whitesburg. The injured man was Paul Hall of Craft’s Colly, who had been working to fell a tree that had become a threat to a home near the 5th Street entrance to the Upper Bottom neighborhood.

Hall’s leg was badly injured when a limb he was cutting snapped. Because Hall was using a safety rope he was not thrown from the tree, but was literally left out on a limb, unable to climb down from the tree under his own power.

After the accident occurred, the homeowner called city emergency responders, who arrived to find there was little firemen could do. Because of the tree’s location, on a hillside between the back of the home and the North Fork of the Kentucky River, there was no way to get a fire truck equipped with a “cherry picker” to the scene. With Hall clinging to end of a limb, there was no way that anyone not experienced in tree climbing and tree safety could get to him safely. 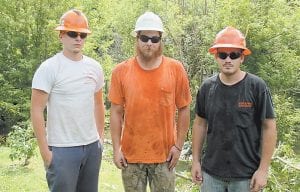 Once every month, the three tree cutters practice with other Asplundh employees on how to rescue other tree cutters who find themselves facing the same predicament as Hall.

“This is the first time we’ve ever had to do it for real, but we’ve practiced it so much it’s become second nature,” said Adams, of Blackey, who has eight years’ experience in the tree cutting business.

Adams was speaking after he, Isom and Noble expertly guided Hall to safety. Hall was lowered from the tree by sitting in the lap of Adams while Isom, of Little Colley, and Noble, of Jenkins, manned safety ropes from up in the tree and on the ground. 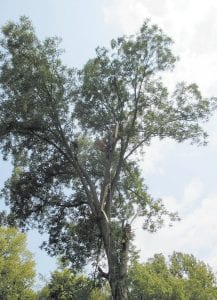 Paul Hall of Craft’s Colly was stranded high up in this tree near the North Fork of the Kentucky River in Whitesburg when Bryan Adams (orange shirt) and Andrew Isom (visible to the left of Adams) reached them during a rescue operation last week. (Eagle photos)

Neither Adams, Isom nor Noble appeared nervous at any moment during the recovery, but the three clearly were relieved the operation went just the way they practice it once a month.

Adams and Isom said Hall “was a little nervous” but handled the situation well.

As Hall was being loaded onto a stretcher for an ambulance ride to the Whitesburg hospital, he said that in 27 years of tree cutting, last Wednesday marked the first time he was ever injured. 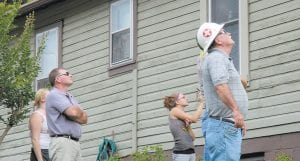 The expressions on the faces of these onlookers show the high level of intensity that was in the air as three Asplundh Tree Experts employees worked to rescue Paul Hall of Craft’s Colly. 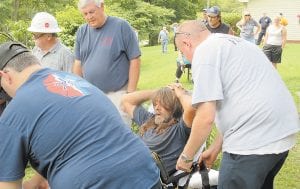 EMT’s with the Neon Volunteer Fire and Rescue Squad tend to Paul Hall after Hall was rescued from high up in a tree near the entrance to the Upper Bottom neighborhood of Whitesburg. Also looking on is Whitesburg City Fire Chief Gary Mullins. Hall, who suffered a leg injury, said the tree cutting accident marked the first time he was hurt on the job in 27 years. 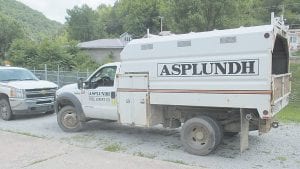 These trucks are used by three Letcher County men who make up Crew 300 for the Asplundh Tree Expert Company. The three — Bryan Adams of Blackey, Andrew Isom of Little Colley, and Trevor Noble of Jenkins — rescued Paul Hall of Craft’s Colly last week.