Weight swings may be risky for overweight heart patients 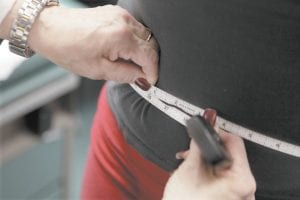 A study published in the New England Journal of Medicine suggests gaining and losing weight repeatedly may be dangerous for overweight heart patients. (AP Photo)

Losing and regaining weight repeatedly may be dangerous for overweight heart patients, a study suggests.

Heart attacks, strokes and death were more common in patients whose weight changed the most over four years.

For some, weight changes might have reflected yo-yo dieting, which some previous studies have suggested may be unhealthy for people without heart problems. That means a hefty but stable weight might be healthier than losing but repeatedly regaining extra pounds.

But big weight fluctuations in heart patients studied could also have been unintentional and a possible sign of serious illness that would explain the results, the researchers and outside experts said.

Doctors not involved in the study called it interesting but not proof that “yo-yo” weight changes are risky for overweight heart patients.

Regardless, the recommendation from New York University cardiologist and lead author, Dr. Sripal Bangalore, echoes standard advice for anyone who’s overweight: “Lose weight but try to keep that weight off.”

The study was published in the New England Journal of Medicine. It’s an analysis of about 9,500 patients involved in a different study that didn’t examine reasons for weight changes. Weight was measured an average of 12 times over four years and some patients lost and regained several pounds in between each measurement.

Weight changes in the highest-risk group averaged about 10 pounds (5 kilograms) over four years. In the lowest-risk group, weight changes averaged less than 2 pounds (0.9 kilogram) over the same period. Deaths totaled almost 500 and were more common in patients with the biggest weight swings.

Most patients lost and regained weight repeatedly, but the researchers didn’t calculate health risks based on the number of times weight changed. Weight fluctuations in normal-weight patients were not linked with heart problems or deaths.

University of Colorado heart specialist Dr. Robert Eckel called it an interesting study, but said it doesn’t prove that weight changes were dangerous. He also said a major limitation is not knowing if weight loss-regain was intentional.

Dr. Clyde Yancy, cardiology chief at Northwestern University’s medical school in Chicago, said there’s no clear biological explanation for how yo-yoing weight might cause harm and that the study results could be merely due to chance.