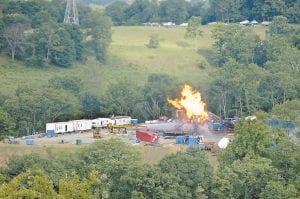 Fire crews from Marshall County battled a gas well fire in Moundsville, W.Va, on Monday. The explosion and resulting fire sent seven people to area hospitals including three workers who were flown to a Pittsburgh burn center. (AP Photo)

A total of seven people were injured Monday when a crew with Union Drilling Inc. struck a pocket of methane gas while sinking a natural gas well through an abandoned coal mine near Moundsville.

Four workers have since been released from West Penn Burn Center in Pittsburgh, hospital spokeswoman Stephanie Waite said. Three remained in fair condition Tuesday afternoon, but Waite would not release any details about their conditions.

It’s unclear how the methane ignited, but the gas continued to burn Tuesday as it vented from a hole near Moundsville.

Kristi Gittins, spokeswoman for Dallas, Texasbased Chief Oil & Gas LLC, said teams with Wild Well Control have been moving damaged equipment from the rig as the methane burns and will try to cap the well when they can safely approach it in a few days.

Union crews had drilled through the mine before without incident, and Gittins said she could not speculate on what might have ignited the methane. Nor did the state Department of Environmental Protection off er a theory.

Union, based in Fort Worth, Texas, was using a crew from Buckhannon as it drilled into the Marcellus shale formation, a vast reserve that underlies Ohio, West Virginia, Pennsylvania and New York.

Union has refused to return telephone messages or comment except to say it’s cooperating with investigators.

The accident was the latest in a series linked to the pursuit of the Marcellus gas.

In Pennsylvania, regulators are investigating what caused a well to spew explosive gas and polluted water for about 16 hours. That driller, EOG Resources Inc., has been barred from drilling until an investigation is complete.

Gittins, however, said Chief is confident that Marcellus shale can be tapped safely.

“Drilling for natural gas is not accident-free. You can’t say that about any industrial operation,” she said. “But we take our role in protecting our workers, the community and the environment seriously.”

The West Virginia blast was not an environmental accident, she noted, but it’s understandable people might have concerns when drilling is new to their communities.

“It is up to us as a company and industry to provide the education about who we are and how we develop natural gas from shale so everyone will be more confident in what we do and learn to trust us,” Gittins said.

Chief has a participation interest in the Moundsville well with AB Resources PA LLC of Brecksville, Ohio, which obtained the permit for the job.