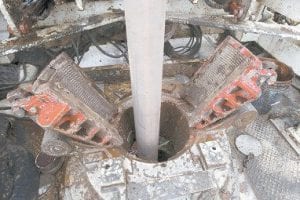 In this photo taken May 14 photo, the drill bit shaft at the carbon storage project site is seen in Hancock County in western Kentucky. Scientists are drilling a well on a western Kentucky cow pasture as part of a project to test how to store emissions from coal-burning power plants. (AP Photo/The Courier-Journal, Bill Luster)

Scientists are drilling a well on a western Kentucky cow pasture as part of a project to test how to store emissions from coal-burning power plants.

The 8,000-foot deep well is expected to be completed this summer. The Hancock County farm will be a test site to study the storage of carbon dioxide, a greenhouse gas that some scientists say is contributing to global warming.

“We don’t have a choice,” said Len Peters, secretary of the Kentucky Energy and Environment Cabinet. “We have to do this for coal to be a part” of the nation’s energy mix.

Once the well is finished, researchers will inject small amounts of CO2.

The $8 million project has been funded largely by the state, ConocoPhillips, Peabody Energy and E.On U.S., the parent of Louisville Gas & Electric Co. and Kentucky Utilities.

The process known as carbon capture and sequestration has been billed as a way to keep the country and Kentucky in the coal business if the government moves to limit CO2 emissions.

Researchers are trying to determine if carbon can be captured permanently and in an affordable way.

Jim Cobb, the Kentucky state geologist and director of the Kentucky Geological Survey, said the Hancock County project will help begin to answer questions about the feasibility of geologic storage of carbon dioxide in Kentucky.

“This project is a great experiment as to how effective we can be,” he said.

Brandon Nuttall of the Kentucky Geological Survey said the project will test the rate at which carbon dioxide can be injected under pres- sure into the most promising underground formations.

Kentucky can theoretically store 30 billion to 35 billion tons of carbon dioxide, Nuttall said. But the actual amount could be as little as 10 percent to 15 percent of that volume, when areas such as earthquake zones, cities and landmarks like Mammoth Cave are factored out, he said.

Environmental attorney Tom FitzGerald, director of the Kentucky Resources Council, said there are so many questions about carbon capture and sequestration that it is “right now more theoretical than real.”