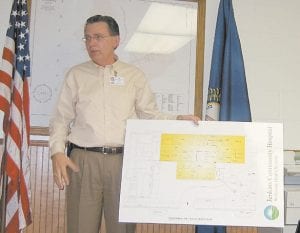 Jim Moore, vice president in charge of facilities for Wellmont, addressed members of the Jenkins City Council on Monday.

Jim Moore, vice president in charge of facilities for Kingsport, Tenn.-based Wellmont, attended the April meeting of the Jenkins City Council meeting on Monday to give a progress report on the renovation of the hospital.

Moore showed the council drawings of planned work and invited them and the public to visit the second floor of the hospital to get an idea of what the rest of the building will look like when work is finished. He also asked the council to send a letter to the Kentucky Department of Transportation requesting a Main Street entry for the emergency room entrance. The council voted unanimously to authorize Mayor Dixon to send the letter.

“I came to share some of the progress being made on the hospital,” said Moore. “Wellmont is proud to be here and we want to play a big part in the growth of the community. We hope the people will choose Wellmont over other area hospitals.”

Moore said Jenkins is getting as much attention as any hospital in the 10-hospital chain and he wants to see it restored to its former glory. He added that the chain has purchased two new helicopters, one of which will serve the Jenkins facility.

“It’s our privilege to be in this community,” said Moore. “I’m originally from Wise County and we want to help bring Jenkins back to better days. That’s Wellmont’s commitment to this community. If you want to see what it will all look like, go to the second floor.”

The Jenkins council also received a visit this week from Dr. Graham Rowles of the University of Kentucky Center on Aging. Rowles told the council he had come to discuss the possibility of Jenkins participating in the Kentucky Elderly Readiness Initiative (KERI). He said that high concentration of “elders” and Baby Boomers about to enter into retirement in the Kentucky River area would make it imperative for communities to be prepared.

Rowles attended at the invitation of the Jenkins Planning Committee, which has been holding ongoing conversations with KERI about the possibility of establishing an assisted living center in Jenkins and other programs which will benefit citizens as they grow older.

‘We have a huge aging population in the United States,” said Rowles. “Jenkins can be a pioneer in this. Kentucky is ahead of the curve in this work and we want to stimulate the initiative locally and statewide to prepare a positive orientation so that elders will be viewed as a positive.”

Rowles said that throughout the country, people about to enter into retirement are woefully unprepared and many have less than $30,000 in savings and feel that Social Security will be their main source of income as they retire. He said it will be much different with the Baby Boomers, who will be generally healthier and more active, and many will either not retire at all or continue to work in other capacities. He also said Ohio has a tax primarily to provide care for elderly people but only three counties in Kentucky have a similar tax.

Rowles said task forces have been established in each area development district throughout the state to provide resources for new development projects and initiatives.

In other business, the council voted to continue its longtime relationship with Nesbitt Engineering of Lexington and Hazard.

In a unanimous vote, the council accepted the recommendation of Mayor Dixon to award the oversight of several water and sewer projects to the Nesbitt firm. Dixon said council members Becky Terrill and Chuck Anderson had joined former member Todd DePriest and Utilities Commission Chair Ked Sanders to examine the bids of seven engineering companies and had awarded points for each category. Dixon said Nesbitt had tallied highest and recommended to retain it for the upcoming work. Paul Nesbitt thanked the council and introduced Sandy Donahoe, who works for his firm in obtaining grants for infrastructure projects.

Donahoe told the council that funding is already coming together for a $2 million project to replace and repair city water lines to eliminate the leaks which have plagued the city and cost the water department a good deal of revenue over the past years.

Donahoe said an Appalachian Regional Commission grant application has been filed for $1 million and a Community Development Block Grant for $500,000 will be available soon. She asked the council to authorize the mayor to sign documents for a $500,000 loan/grant from the U.S. Department of Agriculture’s Rural Development Agency and the council voted unanimously to give Dixon permission.

Nesbitt also made his recommendation to the council on rate increases for water customers. Nesbitt recommended leaving the $10 cost for the first thousand gallons as it is and increasing the cost of the next 2,000 through 8,000 gallons to $3 per 1,000 gallons and over 8,000 at $6 per thousand. He said the increases would generate 22 percent more revenue for the water department, which has been losing money on high end water customers.

Nesbitt also presented three sets of aerial photographs to the city and said the entire city has been mapped with each individual project also mapped individually. Nesbitt was appointed city engineer under the Robert “Pud” Shubert administration and has worked with Jenkins for a number of years on water and sewer projects.

• Police Chief Jim Stephens reported that 103 complaints were answered in March and 27 arrests were made during the month, both slight increases over pervious months. Stephens also told the council he is working with City Attorney Randall Tackett on summons for vehicle owners who continually refuse to purchase city stickers.

• Council member Chuck Anderson reported that most acts are now signed for the Jenkins Homecoming Festival and the committee is still getting requests from food and craft vendors. Marlowe Tackett of Pikeville will headline the Thursday show, the VW Boys headline on Friday evening and John Berry will perform on Saturday evening.

Council member Terrill reported that she had attended the most recent meeting of the Letcher County Tourism Commission only to be informed that she was no longer a member.