Wenning family come together for a camping trip and reunion 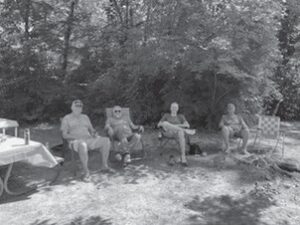 Hello everyone — I hope all are doing fine and dandy. We spent a few days in Ohio having a Wenning Family Camping Trip. It was a good reunion and it was great seeing everyone who attended. Family times are what life is all about.

Two of my great-aunts, the late Minnie Vae Banks of Little Cowan and the late Mattie Vern Banks of Elizabethtown, were twins and had the same birthday as Doris and Donna.

Kathy LaMonte of Clinton, Mississippi came in to stay at her Kentucky place. It was so good to see her. She brought her daughter’s dog, Rylee, with her.

Kathy stopped by and brought me a big pumpkin. Our cousin, Randy Brown, had sent it. It’s currently on my porch waiting to see if it’s going to be a pumpkin pie or a decoration.

I made it on time to the Letcher County Bookmobile this week. The driver even brought some C.J. Box books for me. I checked out two of them. I do like the Joe Pickett series. There’s supposed to be a movie based on one of the books.

I got to see Doris Banks, Carol Caudill, and Anna Yonts at the bookmobile stop. e

Th Fields sisters just had a wonderful trip to Surf City on Topsail Island, North Carolina. Those traveling were Juanita Caudill; Ella Caudill; Janet Napier; Helen Roberts; and Libby Honeycutt. They spent a week on the beach. It was a beautiful place and was not crowded. They did spend some time exploring in Wilmington, North Carolina. I saw their photos on social media and it looked like fun. They had a great and safe trip.

Curtis Ware of Philadelphia, Pennsylvania came in to visit his parents, Susan and Tony Ware of Lexington. He hadn’t seen his parents in nearly 22 months because of COVID. Curtis and Susan went to Amelia, Ohio to visit Jaimie and Skylar Mefford. Curtis met his niece, Kaylin Elizabeth Mefford.

I didn’t see Curtis on this trip but I did see photos.

Donna Watts of Letcher, Doris Ison of Little Cowan, and Patty Ball of Little Cowan spent the weekend at Norris Lake, Tennessee. They did some fishing and relaxing.

Dusty Newsome of Pike County killed a rattlesnake and a copperhead while walking his dog. He took photos of them which I was glad not to see.

The Wenning Family Camping Trip was held at Deer Creek State Park, Mount Sterling, Ohio. We had a wonderful time and more photos were taken this year. We camped at this park last year and plan to go again next year.

Mark and Heather Wenning of Monroe, Ohio came by on Thursday evening and ate with us. They both had to work on Friday and couldn’t camp.

On Saturday, Curt Wenning of New Breman, Ohio; Kevin and Tina Wenning of Coldwater, Ohio; Katie, Derek, James, Hayden, and Palmer Fullenkamp of Cincinnati, Ohio came out for the day. We missed the ones that couldn’t make it but we did enjoy spending time with the ones that came.

Greg brought his boat and those that were there on Friday spent time on the lake. Back in the 1990s we stayed in the cottages at this park. Mike and I brought a boat back then and gave tube rides to the kids. We had forgotten that it was at this park until Tina reminded us.

On Saturday evening we had exciting games of Bingo with prizes. We ended up playing with flashlights as it got so dark.

Mike and I had our entire family there. All the sons and daughters were there. We had a group/family photo taken. It was the first one in a long time. Our one daughter-in-law is in medical school so it’s hard to get all together. I was thrilled to have everyone together for a little while.

The four Wenning brothers had a group photo taken. I believe that Mike’s parents (the late Francis and Linda Wenning) would be so proud that the family still gets together.

This week’s quote is attributed to Frederick Buechner. “You can kiss your family and friends good-bye and put miles between you, but at the same time you carry them with you in your heart, your mind, your stomach, because you do not just live in a world but a world lives in you.”

If you have any news please email CowanNews@aol.com. Thank you.

Have a wonderful week and stay healthy.