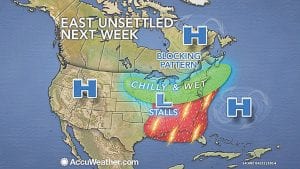 AccuWeather.com reports a large storm will form over the eastern half of the nation next week and will bring a swath of unsettled conditions that lasts for days.

Millions of people looking for a long period of sunny, warm weather from the Midwest to the South and the Northeast will need to look elsewhere next week.

The unsettled pattern will stretch from Chicago and Detroit to Atlanta, Washington, D.C., New York City and Boston. It is expected to arrive in Letcher County next Monday and remain through at least Friday (May 2).

According to Accu- Weather Chief Meteorologist Elliot Abrams, “ Just when you thought wonderful spring weather was going to finally set up shop, this happens.” The upcoming pattern has the potential to be quite chaotic with untimely showers and thunderstorms for your ball game or morning jog.

Temperatures may average 10-15 degrees below normal over a several-day stretch, especially where rain and storms are frequent visitors.

Winds high in the atmosphere, known as the jet stream, sometimes take on a configuration that resembles the Greek letter Omega. This type of setup, which is forecast for next week, is known as an Omega Block.

The atmospheric traffic jam produced by the Omega Block typically brings prolonged cloudy, cool, wet weather to areas beneath the storm part of the pattern and days of sunshine surrounding the storm.

The pattern is actually a common occurrence during April and May as a piece of the jet stream breaks off and gets left behind.

“Such patterns in the past have even resulted in small pockets of wet snow into May,” Abrams said.

Many areas from the Mississippi River to the Atlantic coast will end up within the cloudy and wet part of the pattern.

The exact position of this storm will determine which areas are the wettest. On the edge of the storm, there may be episodes of sunshine, but also passing showers and thunderstorms may sweep through these same areas on a daily basis.

Since the April sun is fairly strong, it can warm the lower atmosphere enough to produce gusty thunderstorms with hail. In areas from the Midwest to the South to along the Atlantic Seaboard, where the sun is out for a time on any day next week there will be a risk .

According to Accu- Weather Long Range Expert Paul Pastelok, “There is the potential for drenching rainfall and an elevated flooding risk in this pattern from the central Gulf Coast, northeastward to parts of the Appalachians.”

In this area, the rainfall has the greatest potential to be heavy and repetitive.

The swath of mainly sunny, dry weather is likely to occur over portions of the Great Plains, offshore over the Atlantic and perhaps into part of Atlantic Canada.

Pastelok expects that some dramatic changes will occur in many areas once the storm leaves.

“Take away the cool puddle of air from the storm and what will remain is a large area of warmth over the eastern half of the nation,” Pastelok said. “We feel that warmth will build northeastward from the southern Plains into the Southeast, Ohio Valley and Northeast later on during the first week of May.”

For those praying for rain over parts of western Texas to western Kansas and eastern Colorado, the long-range team of meteorologists from AccuWeather expect some relief from drought conditions to begin during June. However, dry conditions may build and evolve into substantial drought in parts of South and central Texas to Louisiana and Arkansas this summer.