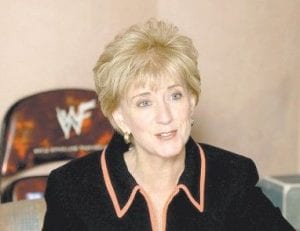 All are featured guests this fall with the WWE as Vince McMahon’s machine undergoes some image polishing and stresses a family friendly approach.

They’ve toned down the language, gotten rid of the fake blood. The lingerie matches are gone, with the Divas now wearing the type of workout clothes common at the gym. Characters who are popular with youngsters, such as John Cena and Rey Mysterio, get more screen time, and the WWE Kids magazine debuted last year.

The WWE has worked with networks that air their programming to change parental guidance ratings from TV-14 to PG.

“We just followed our audience and tried to listen to them,” McMahon, WWE chairman, said. “It’s a more sophisticated product. It’s just the right move businesswise, but more specifically the right move in terms of reaching our audience.”

McMahon said it’s been a gradual process, with the company now trying to spread the word to potential viewers and advertisers who might not have given the soap opera in tights a second look.

During the peak of what the company refers to as its “attitude era” a decade ago, the WWE’s audience was dominated by young men. While its popularity has waned, the fan base has simultaneously grown older and younger with new constituencies, according to audience research. A little more than a third of its audience is female. The audience is ethnically more diverse that most shows: 62 percent of audience is white; 20 percent of the viewership is black and 23 percent is Hispanic — Hispanics were counted as both white and Hispanic. It’s the mostwatched English-language show on cable among Hispanics, the company said.

With the Ultimate Fighting Championship and mixed martial arts becoming more popular as competitors, it made little sense for the WWE to ramp up the attitude with violence and sexuality, McMahon said.

“You really can’t compete with that,” he said. “Why not deliver a more sophisticated product and not go to those extremes? If the audience wants those extremes, they know where to go and how to get it.”

Going PG has helped the company draw advertisers who might have looked away before. Pepsi, 7- Eleven stores, Mattel toys and the Army National Guard are among the sponsors that have signed up since the shift, the company said.

The association with steroids also hurt. Anabolic steroids were found in the home of wrestler Chris Benoit after he killed his wife, 7-year-old son and himself in their suburban Atlanta home two years ago. McMahon toughened the WWE’s drug testing rules.

“Their public image was pretty bad,” said Dave Meltzer, publisher of the trade publication Wrestling Observer Newsletter. “They took a major hit, and said ‘we’ve got to become a kinder, nicer company.'”

Both Meltzer and Jim Varsallone, who covers professional

wrestling for the Miami Herald,

said they can tell the difference in the programming. The changes are subtle, though and they’re not sure the casual fans will notice.

“I do not get complaints from fans,” Varsallone said.

The work courting kids has paid off, said Varsallone, who sees many more young faces at WWE shows. The promotion of Cena, who has a hip-hop attitude popular with young fans, and Mysterioso, who has lots of highflying moves, has helped. They have an underdog mentality that many of their fans find very appealing.

It may not be a coincidence that Vince’s wife, Linda McMahon, has just stepped down as WWE CEO to become a candidate for the U.S. Senate in Connecticut. Her husband said the changes at the WWE were in motion long before he knew she was interested in a political career.

The guest stars are a way to give the WWE more of a variety show atmosphere and some juice in a traditionally slow season, when football siphons off many of its fans. Pittsburgh Steelers quarterback Ben Roethlisberger was a recent guest. Shaq was particularly popular.

Osbourne, in fact, could be a role model. The heavy metal singer thrived in a career considered threatening by many parents, before becoming an unexpected star cutting across all age groups with the reality series about his family life.

The non-wrestling celebrities also get publicity for the WWE on entertainment shows such as “Access Hollywood” that have otherwise ignored the company.