What ‘Bam’ will bring

“He is a freight train coming down the line. He is a power finisher,” said High Point Christian Academy (N.C.) coach Brandon Clifford said. “He will not back you down and shoot jump hooks. What Calipari sees is a high post player who can get the ball in the middle of the floor and face the basket. If he puts the ball on the floor, it’s hard to stop him from getting to the rim or if you do help off, he can pass to shooters. That is where he shines. He has a good-looking stroke (shot). He’s never had the green light to shoot the 3 ball, but we are going to let him because that’s what he needs for the future because he’ll be a 4 (power forward) who can play inside out at the next level.”

Adebayo is ranked as the nation’s No. 6 overall recruit by ESPN. Last season at Northside High in Pinetown, Adebayo averaged 32.2 points and 21 rebounds per game. Last summer he led a U.S. select team in scoring (11.3) at the 2015 adidas EuroCamp in Treviso, Italy. 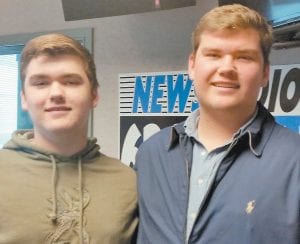 Drake Jackson will play in the Army All-American Game in San Antonio Saturday while his younger brother, Dane, will play in the middle school game. Jackson, a UK commit, is glad offensive line coach John Schlarman is back at Kentucky. (Photo by Larry Vaught)

The 6-10 Adebayo transfered to High Point in August. The team has nine Division I recruits, including Boston College commit Ty Graves. He’s averaging about 18 points and 14 rebounds per game this season. He’s also shooting

60 percent from the field.

“They kind of grew up together and he (Graves) decided to come to our school. I met with Bam in the spring. We developed a relationship and he saw it as a great fit,” Clifford said.

It’s hard to imagine a school in high school or college where Adebayo would not fit.

“He dunks so hard that rims go up (rather than break). It won’t surprise me if a breaks a rim or two this year,” Clifford said. “He is a powerful kid and is only going to get bigger and stronger. He is 260 (pounds) and can carry more weight. He has a LeBron Jamestype body.

“He is a freak in the weight room. He has so much natural strength and then he works so hard. He’s only going to get more explosive and more skilled. His best days are ahead of him and Kentucky is going to be really happy they got him.”

“Once Bam gets comfortable next year and some games under his belt, he will be an impact player,” Biancardi said. “He will be better than any frontcourt player Kentucky has had in a while.

“Bam plays hard every possession. He runs the floor no matter if he gets the ball or not. He’s on the glass every shot. On offense, he has a lot better skils than he gets credit for. He will score in the post, on dump downs, on run-outs, on boards. He is so strong and powerful. He is really, really good.”

Adebayo is having a terrific season and Clifford says he is showing he was wrongly tagged as a “back to basket pound on the block guy” simply because he is such a strong finisher at the rim.

“He is more comfortable facing basket. He is really good with the ball in his hands at 15 feet where he is able to face up and see what defense is doing and make reads. He is a great passer. If you double team him, he finds shooters. If he is not doubled, he will score or get fouled because he is so explosive.

“He is a very good playmaker. One of his biggest strengths is just getting the ball off the rim and just going himself. He does not plod up the floor. When he gets it and pushes the ball like he can, he reminds me of LeBron James with the way he is so athletic and shifty. He can get to the rim and there’s nothing a high school player can do. No, he’s not LeBron, but he could be one day. That’s the type body he has. He can drive and is willing to pitch the ball to open guys. He just makes everybody better.

“He wants to play this game for a long time. He knows he can’t be a bruiser only and make it at the highest level. We like to move him around. He’s a very underrated ballhandler and I still say he’s so explosive that there is nobody in the country that can stop him.”

Clifford said the “big stage” at Kentucky and sacrifice required because of the talented teammates is a perfect for Adebayo.

“Bam wants to be a pro. If he goes to another school there would have been pressure to dominate every night but at Kentucky he does not need to do that,” Clifford said. “He can be his normal, unselfish self. Then every game is a TV game, so there is no problem getting NBA scouts to games.”

The coach says Adebayo is a humble youngster who will be a “treat” for Kentucky fans.

“He is very motivated. He knows what he is trying to accomplish. He wants to take care of his mother one day. She has done a phenomenal job keeping him grounded. He never acts like a superstar,” Clifford said. “We get along great. I could not mesh with a guy who wants to be the superstar. He’s just a normal kid with great athleticism. He is a stud. He turned 18 in July and weighs 260 with eight percent body fat. He does a lot for us that people on the national circuit did not see. Cal sees that upside. He wants to punish the rim, and Cal likes that.

“He’s just a great teammate and is happy when we win. That’s why he can go to place like Kentucky with other superstars and be fine. He can play with other superstars and just go about his business. He’s a great teammate with a great smile. He’s not a prima dona. He’s a perfect fit for Kentucky. Bam wants to win and if he does that and works, he knows individual stuff will take care of itself. Cal sees that and sees a kid with the potential to be a No. 1 pick in the NBA draft that is so humble. He’s just a good-hearted kid, got a great smile and plays his tail off.”

“He is everybody’s best friend. We have had great athletes here before, but nothing like him. Talk to the front desk lady or random people at our school and they will all tell you he is just an awesome kid,” Clifford said.

“He was a great guy and I believed in him,” Jackson said.

However, he wasn’t about to change his commitment to Kentucky after Dawson lost his job. Now if offensive line coach John Schlarman had not been retained, it might have at least made him think a bit about his decision.

“I committed to Kentucky and not the coaches, but it would be devastating to me if Schlarman left for any reason,” Jackson said. “It would suck if he went somewhere else. It’s a nice bonus to have him still here and I was always confident in his job security. He has had to use a lot of Joker Phillips’s recruits and has got guys into the NFL. People look at sacks, but a lot last season were coverage sacks. I think coach Schlarman is doing a great job and I cannot wait to play for him.”

Same with new coach of the offense, Eddie Gran.

“I was confident coach (Mark) Stoops would make a good hire,” Jackson said.

He would like to have played with quarterback Patrick Towles, a two-year starter who is transferring to Boston College.

“I didn’t have a bad reaction to his transfer because it is best for him,” Jackson said. “He has a great personality. He is such a good allaround guy on and off the field. He’ll be successful no matter what. I was looking forward to playing with him but what is best for him makes me happy.

“Guys can be good players but not thriving at one school and a change of scenery can be good for them. There are players that just need to transfer and then are great at the new school. … I know he is doing what he thinks is best for him.”

Another Kentucky quarterback, Reese Phillips, also decided to transfer in hopes of getting more playing time but he offered support for Stoops. He got the job after Joker Phillips was fired and only a few weeks before Phillips graduated from high school and enrolled at UK early so he could go through spring practice.

“He’s doing a good job. He took over a very bad situation. When I first got there, it was embarrassing. The program has come a long way under coach Stoops. The future is bright. They will get it fixed and get more guys in that can play,” Phillips said. “For me, the 2-10 team and both 5-7 teams had some bright spots. But now I want to be on a winning team and compete for a championship just like coach Stoops wants at Kentucky.

“I think they can win next year. The talent is there. It is a hard situation. It’s a tough spot. As long as Drew stays healthy, they will be okay,” Phillips said. “I think another year for the receivers and line which was really young overall will help, too. I wish Kentucky nothing but the best. I love Kentucky and always will. But this is just something I have to do because I want to play.”

There was some confusion over whether he would have two or three years of eligibility remaining because of an injury he suffered during the offseason. However, he was used as a holder on kicks and that means he’ll have just two years left to play.

“I ended up holding, so that counts as playing and is crazy to me,” Phillips said. “I am going to see what happens but I probably will not get the year back. It was really just a miscommunication between me and coach Stoops. I was upset that I lost the year when I found out. I knew I did not play and was frustrated that holding cost me a year.”

Phillips denied there was any unusual inner turmoil on the team despite his own misunderstanding with Stoops. Instead, he said key injuries hurt the team and led to ups and downs.

“When we were healthy we could move the ball. There was no dissension in the locker room. People get frustrated. There will always be arguments. That is what football is about,” Phillips said. “That is part of the brotherhood. You are never going to be happy with losing. Some teams can overcome that and some can’t. But there was not a divide. It was just frustrating that we lost.”