What does future hold for UK? 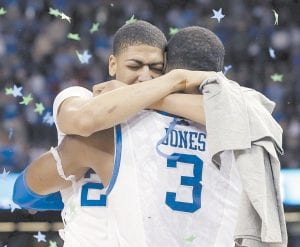 What does the future hold for the Kentucky Wildcats, who just won the 2011- 12 national championship?

While many members of Big Blue Nation will celebrate deep into the spring and summer with this NCAA championship there will be many who are already discussing, debating, and planning next year’s UK team roster. That’s just the lay of the land in this Commonwealth of hoops crazy citizens.

Most insiders I know around UK basketball think freshman Anthony Davis and Michael Kidd-Gilchrist are pretty much one and done, as they say, with a slight chance of Marquis Teague staying one more year and Kyle Wiltjer defi- nitely on campus for a minimum of two more years. Sophs Terrence Jones and Doron Lamb have been all over the NBA draft projections during the season. Jones has been touted as high as the No. 8 pick to as low as a late first round pick. Lamb is more likely to return than Jones, but his stock has been as high as a top 15 first round pick on a couple of draft boards.

Without a whole lot of thought or solid information

I’m projecting that the following players presently on the roster will return for next season along with the three lone signees to date:

The players listed below are still on the recruiting board for this spring. UK is involved with all of them and should know within a few weeks if any of them will be a Wildcat for the 2012-13 season. Each player’s name is listed according to his ranking by most recruiting services:

Ira Combs lives in the community of Jeff in Perry County where he operates Tri State Sports Media Services Inc. with his brother Harold.