What happens to love when trust is gone 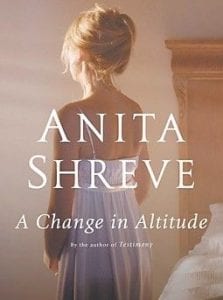 “A Change in Altitude” is a new novel by Anita Shreve. (AP Photo/Little, Brown and Company)

“A Change in Altitude” (Little, Brown and Company, 320 pages), by Anita Shreve: No one is better at gently, but thoroughly probing the interior life of her characters than Anita Shreve.

In her latest book, “A Change in Altitude,” she traces the effects of distrust and tragedy on a newlywed couple also trying to deal with life in a strange country. Margaret and Patrick leave for Kenya where Patrick has a fellowship in equatorial medicine at Nairobi Hospital. They see the trip as a great adventure to start their married life.

A plumbing problem in the cottage they rent forces them to move in temporarily with their landlords, Arthur and Diana, a British couple that Margaret finds slightly intimidating.

Arthur and Diana propose climbing Mount Kenya, a difficult and dangerous climb that Margaret is especially unprepared for, but she and Patrick agree.

As they have gotten to know each other, Arthur has shown interest in Margaret. It may only be friendly, but it also stirs jealousy in Diana and Patrick. When Margaret and Arthur are found holding hands after a night in a climbing hut, Diana’s fury leads to a devastating accident.

Patrick blames Margaret, telling her that Arthur’s interest in her, and her failure to stop it, caused the accident.

“If you and Arthur hadn’t been holding hands and sleeping close to each other, Diana wouldn’t have had the anger to do what she did. I believe that,” Patrick tells her.

Margaret questions herself as well, and wonders how her marriage can survive.

As Patrick spends more time in his studies and work, Margaret begins to understand the complex country and people around her. She gets a job — over Patrick’s objections — as a photographer at the Kenya Tribune, a newspaper that is not in the favor of the country’s leaders.

As she is drawn into the work, she is also drawn to a reporter at the newspaper. He is Rafiq Hameed, the son of a Pakistani father and Welsh mother, and a man she admires professionally and personally. He is also someone she can finally talk to about the incident on the mountain and its aftermath.

“A Change in Altitude” reflects many of Shreve’s familiar themes: loss and grief, the relationship between a man and woman, and how one moment can change a life forever.

Shreve weaves a strong mix of exotic Africa and interesting characters, producing a potent story that will keep readers thinking about them long after the last page of the novel.