What lies ahead after ex-coal CEO’s criminal conviction? 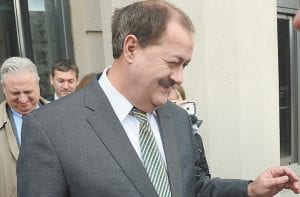 Don Blankenship smiled as he left the federal courthouse after the verdict in his trial in Charleston, West Virginia on December 3. (F. Brian Ferguson/Charleston Gazette via AP)

Tens of thousands of coal miners have died in the last century, and the coal company CEOs have received a free pass, says West Virginia University law professor Patrick McGinley.

But with the conviction of Don Blankenship, the former CEO of Massey Energy, that could change.

The 65-year-old was found guilty December 3 of conspiring to willfully violate mine safety standards; he was acquitted of two other counts relating to false statements and omissions to investors and federal securities regulators.

“This conviction has the po- tential to save lives, to make workplaces safer,” McGinley said. “It all depends on if prosecutors will finally recognize the value of applying criminal law to corporate executives when the evidence shows they’re criminally culpable.”

Not only must state and federal prosecutors have the courage and wisdom to follow the evidence when there are serious workplace injuries, but these prosecutions must be consistent to have a lasting effect for company leaders, McGinley said.

“It depends on whether state and federal prosecutors begin to take violations of workplace safety much more seriously than they have historically. It could be a oneof a-kind prosecution. We really have to wait to see if prosecutors step up to the plate.”

Troy Giatras, a West Virginiabased federal and state criminal defense attorney with 25 years experience, agreed that the conviction is monumental.

While the conviction likely will not be at the front of the minds of company CEOs, Giatras said it will have an impact.

“If you’re going to be the point person over your company, you have the obligation to figure out what’s going on. With fingers pressed hard on all daily activities, you need to be responsible for those activities.”

The U.S. Attorney’s Office considered its prosecution a success, even though Blankenship was found not guilty of all felony counts of the indictment.

Throughout the two-month trial, prosecutors called 27 witnesses to testify, including a number of underground miners who saw firsthand the unsafe conditions in the Upper Big Branch mine where an explosion killed 29 of their co-workers and friends on April 5, 2010.

Prosecutors worked their way up the chain of command, calling miners, foremen, superintendents and former company presidents to testify.

But for one of the jurors, the most powerful piece of evidence came from Bill Ross, a former Mine Safety and Health Administration official who was hired at Massey just days after he retired in effort to lower the number of citations the mines were receiving.

“I think the biggest piece of evidence in my eyes was the Bill Ross memo,” said juror Bill Rose. “That really showed what was wrong and that’s why he was hired on, and after he gave his opinions, they made no change to conform to his recommendations.”

The eight-page memo, issued June 25, 2009, highlighted a number of problems at Massey, including a lack of manpower, lack of training, the falsification of dust samples and the “Big Four” violations — ventilation, roof control, electrical and clean up of rock dust and coal accumulations.

Ross said in the memo that the attitude at Massey was “if you can get the footage, we can pay the fines.”

One miner told Ross, “We are like robots. Everything is laid out for us, but we aren’t given the manpower to actually do it.” And “we are told to run, run, run until we get caught; when we get caught, then we will fix it.”

Prosecutors painted Blankenship as a micromanager, especially at UBB, where a full day of production could yield $600,000 in revenue.

They argued he cut costs at the expense of miners, declining a number of safety-related purchases and the hiring of additional miners who could have tended to safety adherence at the mines.

Defense attorneys countered those claims by saying it’s a CEO’s job to make sure a company is profitable, and that Blankenship never directly instructed anyone to violate safety laws.

When the time came for jury deliberations, more than 500 exhibits had been introduced into evidence — including hundreds of citations received at UBB and memos and recordings from Blankenship himself.

After hearing all the evidence, Rose said he was convinced Blankenship was guilty of all counts of the indictment.

But an initial poll showed not all jurors agreed — the court received a note November 19 indicating the jury was deadlocked.

U.S. District Judge Irene C. Berger ordered the jury continue deliberating, so jurors began sifting through each piece of evidence from the prosecution and the defense.

Rose said even after going through all the evidence, piece by piece, he still thought Blankenship was guilty on all counts.

Berger decided to give the jurors an Allen charge, or “dynamite charge,” which encourages continued deliberation. The charge asks jurors to reflect upon their own opinions and to reconsider the opinions of others. Additionally, the judge told jurors they could return a partial verdict.

Professor McGinley agreed that this case was a difficult one, especially with the lengthy testimony from former Performance Coal President Chris Blanchard and several defense documents that indicated Blankenship cared about safety at the mines.

He said although Allen charges can be considered coercive, he does not believe Berger’s order put any coercive pressure on jurors. “More than anything, it just explained their options.”

Giatras called the Allen charge “a necessary evil,” but said the judge’s instruction on a partial verdict was a counterbalance to any potential coercion.

He said the charge is designed to push people who are not resolute or firm in their convictions, and to let people know it’s OK to change their opinions.

But Giatras noted it’s unlikely anyone will ever know whether the charge had an impact on the case.

McGinley thought the case was heading toward a deadlocked jury, but ultimately, jurors returned a guilty verdict Thursday just before noon on Count One, conspiracy to willfully violate mine safety standards.

Count One was broken into two parts: conspiracy to violate mine safety standards (a misdemeanor) and conspiring to defraud MSHA (a felony).

Jurors returned a verdict of not guilty for felony Counts Two and Three, lying to investors and federal securities regulators after the explosion, which carried the heaviest penalties.

Blankenship’s conviction carries a potential sentence of up to one year in prison and a maximum fine of $250,000. The former CEO could also be fined up to twice the financial loss or gain resulting from the conspiracy.

Many family members of fallen miners expressed their concern that Blankenship will never spend a day behind bars, but Giatras believes Blankenship’s chances of incarceration are high.

“Given the circumstances of the case, it would surprise me if he does not go to jail.”

A pre-sentence investigation report will be completed, which Giatras said will include Blankenship’s background and the fact he has no prior criminal record.

“A substantial amount of time will be focused on his financial resources (to determine a potential fine).”

Of course, Blankenship’s defense team will file an appeal after he is sentenced.

But Giatras said it’s possible that Blankenship could complete his sentence or have nearly completed it by the time the 4th Circuit Court of Appeals reaches a decision.

As for the grounds for appeal, McGinley said it’s difficult to speculate, but it could range from the admissibility of evidence and testimony, to the restriction of some pieces of evidence, such as additional recorded phone calls and a video from the rollout meeting of the Hazard Elimination Program.

Another important aspect of this case, McGinley said, is the “unlimited, deep pockets” to pay for the defense.

“This is, at least up to this point, $10 million of attorney’s fees and costs, and there will be millions more spent on appeal… This is justice for the wealthy.”

He said the defense attorneys will meticulously pick through the court transcripts to find any issues that could provide a basis for appeal and a reversal of the conviction.

Whether Blankenship goes to prison is up to Judge Berger, McGinley said.

“She’ll have to look at the crime, the underlying facts and the value of sentencing. Is this a case where a message should be sent to others? Here, in this instance, we’re talking about corporate executives who place their employees’ lives and health at risk in order to seek profits over safety.”

Regardless of Blankenship’s penalty, which will be handed down this spring, Giatras said the case has reached its conclusion. The jury returned a verdict on all counts, none of which can be retried.

“There’s a win for both sides in this case,” Giatras said. “And the significance of the verdict cannot be undermined simply by the fact it was guilty on only one count.”

McGinley said the U.S. Attorney’s Office did an extraordinary job in putting its case together and presenting it, and the judge did an excellent job in ensuring the defendant had a fair trial. He also said he considered the defense counsel worth the $10 million billed.

“Justice was served at the end.”