What time were you born? Many babies arrive at noon 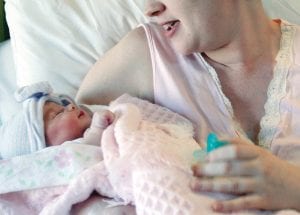 A mother holds her newborn baby at a hospital in Corpus Christi, Texas. Noon is the most common time of day for babies to be born without help, according to a first-ofits kind federal report. (Michael Zamora/Corpus Christi Caller-Times)

The noon hour is one of the most common times of day for babies to be born.

The 8 o’clock hour is even more popular. That’s the peak time for cesarean sections, which tend to be scheduled in advance, a new report shows. For deliveries that are moved along with labor-inducing drugs, mid-afternoon is most common.

Overall, daytime hours are the busiest and the wee hours of the morning are generally the quietest in delivery rooms.

Federal researchers looked at birth certificates in 41 states and the District of Columbia to figure out what times babies were born in 2013. The time wasn’t provided by most states until recently, so it’s not known whether the timing of births has changed over the years.

About half of all births involved C-sections or druginduced labor in 2013. Of those that didn’t, the most common delivery time was the noon hour; five percent of births occurred then. The midnight hour is the least common with about three percent of those deliveries. Why the births peak around noon isn’t clear, said the report’s lead author, T.J. Mathews of the Centers for Disease Control and Prevention.

Only about one percent of births are outside the hospital usually at home. In contrast to hospitals, the most common time for home delivery is between 3 a.m. and 5 a.m.

More facts from other reports about moms and births:

• Tuesday is the day with the highest number of births, on average. Sunday has the lowest number.

• There are nearly 4 million U.S. births a year.

U.S. birth rates fell to record lows in 2013 for women under 30, but rose for most older age groups.

• About 40 percent of babies are born to single women.

• A third of births are c-sections. Public health experts say many of them are medically unnecessary.