What you should know about virus hitting kids 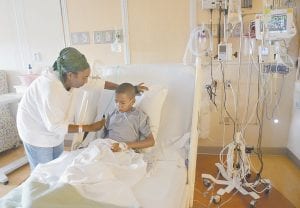 Melissa Lewis, of Denver, helped her son, Jayden Broadway, 9, as he coughed in his bed at the Children’s Hospital Colorado in Aurora, Colo. He was treated for the enterovirus 68 and released, but his asthma made the illness more difficult to fight. A wave of severe respiratory illnesses has swept the country in the last two months, propelled by enterovirus 68. The virus has caused serious breathing problems in many children, and now is being eyed as possible factor in at least four deaths, and muscle weakness and paralysis in children in Colorado and perhaps other states. (AP Photo/The Denver Post)

A wave of severe respiratory illnesses has swept the country, including parts of Kentucky, in the last two months, propelled by what was long considered an uncommon germ.

The enterovirus 68 has caused serious breathing problems in many children, and now is being eyed as possible factor in at least four deaths, and muscle weakness and paralysis in children in Colorado and perhaps other states.

The Centers for Disease Control and Prevention has released a report on the virus. The investigation continues and many questions remain unresolved.

Some questions and answers about the germ:

Q: Is this virus new?

A: No. It was first identified in the U.S. in 1962, and small numbers of cases have been regularly reported since 1987. Because it’s not routinely tested for, it may have spread widely in previous years without being identified in people who just seemed to have a cold. It’s one of a group of viruses that contribute to an uptick in cold-like illnesses every year around the start of school.

In August, the virus got more attention when hospitals in Kansas City, Missouri and Chicago had many children with trouble breathing. Some needed oxygen or more extreme care such as a breathing machine. Tests found enterovirus 68.

Q: How many people have been severely sickened by the virus?

A: Lab tests by the CDC have confirmed illness caused by the germ in 538 people in 43 states and the District of Columbia. Almost all are children. Testing is limited and has been focused on very sick children, so it’s likely that many, many more people — including adults — have been infected.

Q: Why are most of the severe cases in children?

A: They generally have not been exposed to enteroviruses as often as adults are, and are less likely to have developed immunity to them. Some children are especially vulnerable because of pre-existing conditions— for example, many hospitalized children were kids who had asthma.

Q: Why are more severe illnesses from enterovirus 68 being reported this year?

A: That’s a mystery. Health officials have not found a recent mutation or other change in the virus that would cause it to become more dangerous. Clusters have been reported in other countries, including some Asia nations and the Netherlands, in recent years.

Q: What about the reports of deaths?

A: Last week the CDC said four people who were infected with enterovirus 68 died last month, but what role the virus played in the deaths is unclear. Investigators are trying to sort out if the viral infection was coincidental, a contributing factor or a main cause. One case was a 10-year-old Rhode Island girl who died after infections of bacteria and enterovirus 68. Rhode Island health officials suggested the bacteria — Staphylococcus aureus — and the virus may have formed a rare and deadly combination, but the investigation continues.

Q: And what about the reports of weakness?

A: Recently, the CDC sent doctors an alert about nine children at a Denverarea hospital who suffered muscle weakness or paralysis in the neck, back or limbs about a week after they had a fever and respiratory illness. The number since has grown to 10.

Four of the children tested positive for enterovirus 68. But health officials don’t know whether the virus caused any of the children’s arm and leg weaknesses or whether it’s just a germ they coincidentally picked up.

The CDC asked doctors to report patients 21 or younger who developed limb weakness since August 1 and who have had an MRI exam that showed abnormalities in the nerve tissue in the spinal cord. Since putting out the call, several reports have come in, but the CDC is still evaluating which should be counted as similar cases.

Q: What can I do to protect my child?

A: The CDC recommends making sure children and their parents are up to date on all vaccinations, including those against respiratory diseases like flu, measles and whooping cough. The other advice has to do with basic hygiene — wash hands frequently with soap and water, stay away from sick people and disinfect objects that a sick person has touched. See a doctor right away if your child starts having severe problems breathing, develops difficulty moving their limbs or walking or standing.