Whatever happened to Ike Tackett? 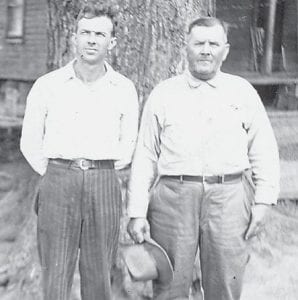 Curt Cornett and Ike Taulbee are pictured in 1944 at Graveyard Hollow. The two men are standing in front of a large tree which Ike Tackett helped cut down when it was dying and was threatened to fall on the Cornetts’ house.

During the Second World War, all the mines in Letcher County were running full force. The Northern factories badly needed the coal from eastern Kentucky. If they wanted to, the men could work seven days a week.

My dad, Curt Cornett, worked in the mines at Marlowe. He married my mom, Thelma Ruth Hughes, who was the oldest daughter of one of the Marlowe foremen, Fred Hughes.

Fred and his family lived in a large, two-story farmhouse below the tipple, later known to many as the Addington House. Curt and Thelma lived in two rooms upstairs. The house burnt down many years later.

One day, a man came walking down Sandlick, and stopped to talk to Fred there on the porch. He introduced himself as Ike Tackett. A day or two later he came by again, carrying all his clothes in a suitcase and he moved in with the Hughes family.

He earned his keep. He cut wood, hoed the garden, washed the clothes, did the milking, mended fences, and did just about everything that needed to be done there on that property. Fred paid him $3 a week.

Then a woman came to the home and it was Ike’s daughter. I don’t have her name. My Uncle Jerry Hughes is the only remaining child of the six kids of the Hughes family. He told me that this woman was the ‘workingest’ woman he ever saw. She didn’t have to be told what to do. She was paid $2 a week.

My grandmother, Martha Lucas Hughes, had badly burned her leg on the kitchen stove and needed help around the house. This woman just about took over the household chores. She cooked, swept, mopped, made beds, ironed clothes, churned butter, and helped Martha every way she could. She didn’t have to be told what to do.

We moved to Graveyard Hollow in 1944. I remember Ike coming to our house many times. He helped Dad and others cut down a large tree. The tree was dying, and threatened to fall onto our house. The whole neighborhood helped cut it down and made firewood from it. Ike supervised everyone.

Ike and his daughter stayed with the family for a few years. For reasons unknown to the Hughes family, they packed up one day and were last seen walking up Sandlick Hollow. They never did know what happened to them. Maybe one of my readers can clear up this mystery.

I looked through all the volumes of the many cemetery records from the Letcher County Historical Society, and I found him.

My Uncle Jerry and I would like to know, “Whatever happened to Ike Tackett?”