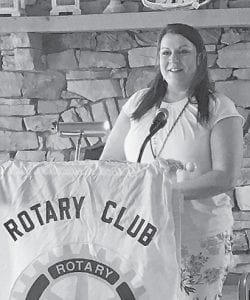 During the May 21 meeting of the Rotary Club of Whitesburg, Amanda Anderson, principal of Burdine Elementary and guest of Rotarian Sherry Wright, shared several activities going on in the school to make it a place where students are excited about learning. Burdine Elementary has an enrollment of 200 students with an average class size of 13. Each child has his or her own Chromebook or iPad to use in the classroom.

As part of the school’s participation in Read Across America in March, the school organized a balloon release. Each balloon was attached with a student’s name and a message to anyone finding a balloon to send a letter to the school acknowledging a balloon had been found. The school has received three letters, and one balloon finder sent books and treats for the children.

Anderson is a graduate of the Jenkins School System and she shared her enthusiasm and excitement about being the principal of Burdine Elementary. She ended her presentation with, “There is no place I had rather be.”