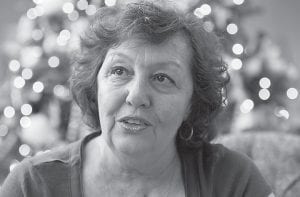 Carol McKenna, 68, speaks during an interview in Pembroke Pines, Fla. If McKenna believes the claims of the insurance industry and many Republicans, she and her husband are among the most at risk to be hurt by Congress’ health proposals. If Democrats are telling the truth, they will be among those with the most to gain. She refrains from any worry, or any premature celebration. She simply believes, “It’ll work out.” (AP Photo)

As Congress gets closer to a final health care bill, many Americans want to know: What’s in it for me?

The answer is: It depends.

On your age and household income. Whether you own a business and whether it’s big or small. Whether you’re insured now and who provides that insurance. In the end, it will depend on how House and Senate negotiators will merge the proposals, and how their vision gets translated into regulations.

Five Americans shared their stories with The Associated Press. Here’s an educated guess on how the health care package taking shape in Congress might affect them.

Coverage: Insured, but struggling to afford it. 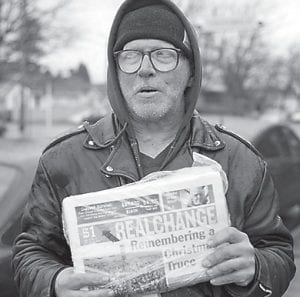 Robert Hansen sells copies of the street paper “Real Change,” outside a grocery store in Seattle’s Seward Park neighborhood. Hansen and most other poor adults without young children don’t qualify for Medicaid. The proposals in Congress would expand Medicaid coverage to people like Hansen. (AP Photo)

Brown was laid off last year from a job she’d held for four years. She’s stayed insured because of the government COBRA program, which allows workers to remain on a health plan for 18 months after they leave their jobs, if they pay the premiums.

Brown works part time and studies medical imaging at College of Lake County. She has a chronic lung condition and was in the emergency room in November with flu and pneumonia. She’s paid about $1,000 in medical bills this year that her insurance didn’t cover.

She doesn’t know how she’ll pay her $500 premium this month because a government subsidy that helped her afford the premium has expired.

“It’s scary to think about what’s going to happen if I can’t make the payment by the end of the month,” Brown said.

The health care overhaul taking shape in Congress would require her to buy health insurance or pay a penalty. She could pick a plan offered through new statebased insurance exchanges and she would qualify for a subsidy to help pay her premiums because she makes less than 400 percent of the poverty level ($43,320 for an individual in 2009). But all those benefits wouldn’t kick in until 2013 in the House bill (2014 in the Senate legislation). Because of her medical problem, she may be able to qualify for coverage during the transition period by going through high-risk insurance pools called for in the legislation.

Coverage: Uninsured since COBRA expired in May.

Nishimura left a full-time job with benefits in October 2007 thinking he’d be able to find another good position.

Then the recession hit.

He’s now a self-employed consultant. Since May, he’s been without health insurance. For 18 months, he bought insurance through the COBRA program. When that ran out, he tried to find other coverage. He’s been turned down by five insurance companies because he has high blood pressure and high blood sugar levels, even though he’s otherwise healthy, has never been hospitalized and controls his conditions through diet and exercise.

“I could get H1N1 or get into an accident and I would be potentially bankrupt,” Nishimura said. “It’s an untenable situation.”

The Medicare buy-in proposal considered in the Senate could have helped Nishimura get insurance, as would portions of both the House and Senate bills that would ban denials for pre-existing conditions. But opposition from moderates and a few liberals is forcing Senate Democratic leaders to scrap the idea of a buy-in to get a bill completed.

Nishimura said he e-mailed President Barack Obama suggesting that lowering the Medicare eligibility age to 55 or 60 would create jobs. “I know a lot of people who would like to retire early, but can’t because of health care,” he said.

An ad agency owner, Brown has been able to offer health insurance to his seven employees, but has had to cut benefits because of rising costs. Like other business owners, Brown is trying to figure out what will emerge from Congress and how it will affect him.

“We haven’t been able to be as generous as we have in the past,” Brown said of the insurance plan he offers his workers. “The good thing is, not a lot of folks are leaving because some body else h as a better plan.”

Health care overhaul might help Brown and his wife with coverage for their daughters, now age 17 and 20. The proposals would allow young adults to stay on their parents’ insurance plans as dependents into their mid- 20s.

Brown would be able to shop for insurance for his workers through a health insurance exchange. Neither of the bills would require him to provide coverage. Both bills provide tax credits to help small companies with average wages of less than $40,000 provide health insurance. But pay levels in Brown’s agency are above that cutoff.

Hansen used to work selling beer and peanuts at Seattle’s now-demolished Kingdome. “Age caught up to me, running up and down the stairs, the physical labor,” said the 58-year-old Seattle native.

Hansen has been homeless since 1994. A top-selling vendor of a weekly newspaper called Real Change, he makes about $1,000 a week. He eats his evening meal and finds a bed at a Catholic Community Services shelter.

The tingling in his feet and the occasional purplish color of his hands worry him. It’s been so long since he’s had a thorough physical exam that he’s not sure if his symptoms could mean a serious health problem such as diabetes. He’s uninsured and finds care in community clinics and emergency rooms.

Hansen and most other poor adults without young children don’t qualify for Medicaid, the state-federal program that helps low-income families with health care. The proposals in Congress would expand Medicaid coverage to people such as Hansen.

Household income: About $39,000 from Social Security
and some earnings by husband as mattress salesman.

If McKenna believes the claims of the insurance industry and many Republicans, she and her husband are among the most at risk to be hurt by Congress’ health proposals. If Democrats are telling the truth, they will be among those with the most to gain.

The 68-year-old retiree refrains from any worry, or any premature celebration. She simply believes, “It’ll work out.”

McKenna and her husband, Morty, who turns 78 on Sunday, are in private Medicare Advantage plans, which many Democrats have called wasteful and which have been made a prime target for major cuts. But Morty McKenna also falls in the coverage gap in Medicare’s prescription drug program ?Çö the “doughnut hole” ?Çö that the health bills have promised to close. More than 3 million Medicare beneficiaries a year hit this gap and start paying the full cost of their drugs until they qualify for catastrophic coverage.

She said the government must “get rid of the abuses” and that pharmaceutical companies “need to step up and be acco untable.” For no w, though , she ’s j ust w aiting to see what actually happens.