What’s new for this fall? Med shows and Leno?! 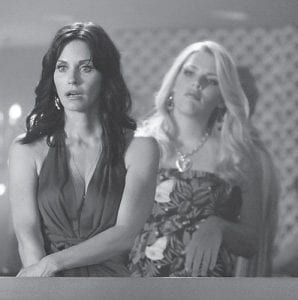 What can you say about a fall TV season most distinguished by the leap to prime-time by Jay Leno?

Not exactly a fresh face after 17 years as host of “The Tonight Show,” Leno has the most-anticipated, most talked-about new show on the networks’ fall slate. Well, at least anticipated and talked about within the media sphere, where speculation rages over whether NBC can get away with stripping a talk-comedy hour every weeknight — instead of more ambitious, pricey episodic fare — in those five prime-time hours.

Is NBC, which continues to struggle in fourth place among viewers, throwing in the towel as it hands Leno nearly one-quarter of its prime-time real estate?

As the network TV business implodes, is NBC being shrewd to make do with less? Is it giving viewers what they didn’t know they wanted: a chipper, never-arerun alternative to sex, crime, blood and guts?

Meanwhile, what kind of advantage, if any, will NBC rivals enjoy going up against “The Jay Leno Show” (arriving Sept. 14 at 10 p.m.) with their sex-crime-bloodand guts dramas, including newcomers “The Good Wife” on CBS and ABC’s “Eastwick” and “The Forgotten”?

Those are a few of the talking points for the new season — among those who are talking.

But do the networks have viewers talking yet? Or even have their attention? Just how excited is the TV audience about Leno’s new show or any of the other 20 series debuting between now and early October on the five major broadcast networks?

Once upon a time, the fall TV rollout was as eagerly awaited by Americans as those shiny new Ford and Chevy models unveiled in dealer showrooms. But motorists know this is the season of Cash for Clunkers. Maybe viewers suspect that, in the new age of digital media, a fall TV season is terribly, um, analog.

Maybe network bosses dream of a simpler, more robust time before the PC became the new TV. In any case, they seem backwardlooking this fall.

The CW is reviving “Melrose Place,” the frothy L.A. soap that, in its initial conception, aired on Fox through the 1990s. The newfangled “Melrose Place,” which premieres Sept. 8, is the first Fall ’09 show out of the gate.

There will also be spinoffs of current series.

CBS’ undercover hit, “NCIS,” will spawn “NCIS: Los Angeles,” starring Chris O’Donnell and LL Cool J as undercover agents fighting crime at the other end of the country from the Washingtonbased original.

Fox’s animated “Cleveland Show” follows longtime pal Cleveland Brown from the “Family Guy” fold as he exits Rhode Island to start a new life in the Virginia town where he grew up.

Other new shows just feel like spinoffs, thanks to their ritualistic familiarity.

ABC’s “The Forgotten” is a drama about a team of dedicated amateurs (the so-called Forgotten Network) who take up cases the police have abandoned, tracking down the identities of anonymous murder victims while solving the murders of these John and Jane Does. Think: “Without a Trace” mixed with “Cold Case,” plus a corpse.

NBC’s “Trauma” blends action and medicine to tell the wild-andwoolly story of first-responder paramedics in San Francisco — a sort of al fresco “ER.” Also on NBC, “Mercy” is a hospital drama told from the nurses’ point of view (think: Showtime’s recent “Nurse Jackie,” plus a dash of TNT’s “Hawthorne”). And CBS is prescribing yet more medicine with “Three Rivers,” which introduces to the genre yet another specialty: organ transplant. Stat!

The CW taps into the vampire craze, though anemically, with its high-school soap, “The Vampire Diaries.”

And ABC evokes the devilish hero of “The Witches of Eastwick” (adapted from the novel by John Updike and 1987 hit film that starred Cher, Susan Sarandon, Michelle Pfeiffer and Jack Nicholson) for its racy new supernatural drama “Eastwick.”

The halls of justice haven’t been vacated.

One of the most promising fall series is CBS’ “The Good Wife.” It stars Julianna Margulies as a wife and mother forced to resume her long-ago career as an attorney in the wake of betrayal when her politician hubby, played by Chris Noth, is jailed for corruption and philandering. (Think: former Illinois Gov. Rod Blagojevich by way of former New York Gov. Eliot Spitzer.)

The fall’s funniest pilot is “Community,” a sort of classroom version of companion NBC comedy “The Office.” Here, a variety of losers (played by Chevy Chase, John Oliver and Joel McHale of “The Soup,” among others) enroll at a second-rate community college for any number of reasons, none of them connected with higher education.

ABC’s “Modern Family” taps variations on a contemporary domestic theme. Crisscrossing with one another, the three main households share the same comfortable upper-middle-class neighborhood. But there the resemblance ends and the laughs begin.

On Fox, “Brothers” is a pleasant surprise. Sharp writing, a plausibly at-odds family dynamic and an excellent cast (especially CCH Pounder as the family matriarch) score a touchdown for this project built around former football pro Michael Strahan.

Fox’s charming hybrid of “High School Musical” and its own “American Idol” is called “Glee,” a one-hour musical comedy set at a high school where the glee club struggles for respect and even its very survival. This turns out to be a challenge on a campus where everybody else seems Looney Tunes.

ABC’s “FlashForward” has a streak of looniness, too. The premise of this promising paranormal thriller: Everyone around the world simultaneously suffers a 2-minute-17-second blackout, then recovers with visions of what may or may not await them in the future.

What else does the future hold for viewers this fall?

Familiar stars from past sitcoms will be starring in new sitcoms.

Patricia Heaton (late of “Everybody Loves Raymond”) stars in “The Middle,” where she plays a frazzled wife and working mother who is middleaged, middle class and Midwestern. The show’s slyest, most poignantly telling joke: Frankie Heck (Heaton’s character) has the unenviable job of selling cars at her town’s sole surviving dealership.

Also part of ABC’s new four-pack of Wednesday night sitcoms: Kelsey Grammer (who after “Frasier” co-starred with Heaton on the short-lived “Back to You”) is back, on “Hank.” This time he plays a Manhattan corporate boss who is forced from his job, and, in an effort to start over and cut back, moves his family to his hometown in Virginia.

Yet another part of this Wednesday comedy block returns Courteney Cox to comedy in “Cougar Town.”

Here, the “Friends” alumna plays a lovely but recently divorced mother of a teen who wrestles with the double standards for aging women and men.

Yes, she’s a budding cougar (slang for an “older,” liberated women who dates younger men), even as she looks askance at her 40-ish sisters who embrace a robthe cradle dating lifestyle.

The cougar theme is far less successfully depicted in CBS’ “Accidentally on Purpose.” Former “Dharma & Greg” star Jenna Elfman plays a woman in her late 30s who has a one-night stand with a guy who is cute but barely adult. A pregnancy, an unintended ongoing relationship and much forced hilarity result.

The CW’s “The Beautiful Life: TBL” is set in the modeling world of New York City, where an Iowa farm boy is discovered while vacationing with his parents.

It has a troubled young model whose worried brother warns her, “It doesn’t matter where you go or whose fancy dress you got on — you can’t run from who you are.” It’s flashy, fffffabulous and suitably silly. But is it good enough (or campy-bad enough) to draw a loyal viewership?

Can broadcast networks launch ANY kind of solid, sustainable hit anymore in the scripted realm?

Observers of the TV scene forlornly wait for a new game-changing hit such as “Lost” or “Desperate Housewives” five long years ago. In the meantime, NBC is striking its own blow for the future of prime-time: repurposing Jay Leno.