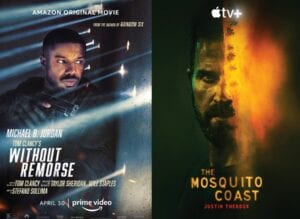 ‘Without Remorse’ and ‘The Mosquito Coast’.

— Now that awards season is finally over, it’s time for some spring action movies and what better way to start than with Michael B. Jordan playing an elite Navy SEAL avenging his pregnant wife’s death in a Tom Clancy adaptation? “Without Remorse,” hitting Amazon Prime Video on Friday, finds the “Creed” and “Black Panther” star playing John Clark (who some may be familiar with as a character in the Jack Ryan universe). Jordan co-stars with Jodie Turner-Smith (“Queen & Slim”), Jamie Bell and Guy Pearce in the globe-trotting action pic, which could very well be the start of another franchise.

— If you’re hunting for something a little more family-friendly, Netflix has the animated “The Mitchells vs. the Machines” premiering Friday as well. Produced by “The Lego Movie’s” Phil Lord and Chris Miller the Michael Rianda-directed crowd-pleaser finds a family whose cross country road trip gets sidetracked by a robot apocalypse. Featuring the voices of Maya Rudolph, Abbi Jacobson, Danny McBride, Olivia Colman and Eric Andre, some have described it as a mashup of “Vacation” and “The Terminator.”

— Or if you’re feeling like mulling over ideas of nature versus nurture, there’s the new documentary “Lucy the Human Chimp,” available Thursday on HBO Max, about a chimpanzee who was raised in a suburban home by a psychologist and his wife and later was transferred back to the wild. Lucy made headlines in her day, having learned sign language and how to eat with silverware, but when puberty hit she became aggressive and destructive and was sent to a rehabilitation center in Gambia. Filmmaker Alex Parkinson promises to go beyond the headlines and focus on the bond between Lucy and her caregiver Janis Carter.

— Hulu’s “The Handmaid’s Tale” is back for a 10-episode fourth season, with the action moving from Boston to Chicago, site of an ongoing rebellion against the oppressive Gilead regime. There are new risks ahead for Elisabeth Moss’ rebel leader June, and no end in sight: The series has been renewed for another season. Three episodes debut Wednesday, with the rest to follow in consecutive weeks. In the meantime, want to take a deeper dive into its themes and real-world issues with Moss, co-stars Yvonne Strahovski, Ann Dowd and Joseph Fiennes, and the drama’s producers? They’re part of “Female Empowerment in the Age of The Handmaid’s Tale,” a Paley Center for Media program.

— The new Apple TV+ drama series “The Mosquito Coast” boasts a notable family connection: it stars Justin Theroux and is based on the 1981 novel of the same name by acclaimed writer Paul Theroux, his uncle. In the adaptation by novelist and series producer

Neil Cross (“Luther”), radical idealist Allie Fox (Justin Theroux) abruptly flees California with his wife and children for a perilous journey through Mexico. The U.S. government is after him, with the why to be unveiled. The seven-episode series co-stars Melissa George, Logan Polish and Gabriel Bateman. After its two-episode premiere Friday, new episodes will be released on consecutive Fridays.